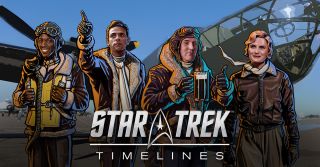 An exclusive release for Space.com shows the "Star Trek Timelines" characters that will be unveiled at the Mission New York event in early September.
(Image: © Disrupter Beam)

In a battle of favorite "Star Trek" crews, it's hard to pick which one is best. Luckily for fans celebrating the 50th anniversary of the iconic franchise this September, a mobile game lets you play with nearly any crew you want to.

Fans of Capt. Kirk, Capt. Picard or Capt. Janeway can play as any of these characters — and, in some cases, different versions of these characters, such as Borg Picard — in a new game called "Star Trek Timelines" from developer Disrupter Beam.

In true Trek style, there's a reason you see multiple crews spanning hundreds of years. A strange space anomaly is bringing together the mortal humans, Vulcans, Klingons and other species. Meanwhile, there seems to be a link with Q, a semi-omnipotent trickster being played by the actor himself, John de Lancie. Players need to figure out what is causing the anomaly and how it is affecting the universe. [The 10 Best Star Trek Games of All Time]

"'Star Trek Timelines' is a place where we want Trek fans to congregate and to form a community that exists in the game and outside of the game, said David Heron, software lead for the game. "We facilitate that through chat rooms and our weekly events, and these are aspects where players can group together and work together and play together."

Voices from the vault

The strategy role-playing game was released in January for Apple's App Store and Google's Play Store thanks, in large part, to a special arrangement with CBS, which holds the copyright to the show.

CBS gave the "Star Trek Timelines" team access to original recordings of the show, allowing for particular renditions of Picard's trademark "Engage!", among other sayings. "We get the cast in the CBS vault of every single television show," said Rich Gallup, the executive producer of the game.

So far, however, the team has not included the alternate universe first portrayed in Hollywood in 2009, nor does it have information on the upcoming "Star Trek: Discovery" series that will premiere in 2017.

From the beginning, the game's designers wanted to include different trenches of the Trek universe, from diplomatic space relations to epic space battles. In many cases, particular episodes are referenced heavily.

"You do everything from solving specific problems you see in an episode through our narrative storytelling system; and we also have a ship battle, so you can re-enact the impressive visual systems," Heron said.

As huge "Star Trek" fans, the development team members were well aware of the 50th anniversary of the show. However, they decided to evolve the game independently of the anniversary.

But the team plans to visit the "Star Trek": Mission New York convention, which will be held Sept. 2-4, and will feature a few new character releases at the event. The USS Enterprise will also have a "special paint job" to commemorate the occasion, Heron said.

In the long run, the team plans to have an interactive storyline with cliffhangers to keep the fans coming back time after time. The choices players make in the game will also be reflected in new content and new stories, meaning the fans will create their own "Star Trek" universe.

"It's a new thing that doesn't exist in gaming," Heron said.