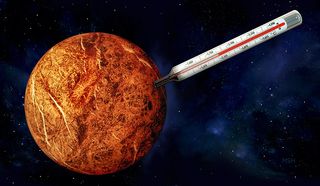 The temperature of a planet — and whether it can support liquid surface water, a key ingredient for life —may depend on that world's formation history.
(Image: © Michael S. Helfenbein / Yale University)

Planets that start out hot may stay hot, no matter how far they lie from their host stars.

A new study suggests that, contrary to prevailing wisdom, the temperature of a planet doesn't always stabilize over time, so hot-blooded worlds may have a hard time holding onto liquid water — even if they reside in the temperate region around their stars known as the "habitable zone."

"Being in the habitable zone is not sufficient to expect Earth-like planetary evolution," study author Jun Korenaga, a geophysicist at Yale University, told Space.com. "Even if you place a planet with the Earth-like chemical composition — the right amount of water, and so on — it may not evolve Earth-like if it started out too hot or too cold." [10 Exoplanets That Could Host Alien Life]

Sweating off the heat

For the past 60 years, most scientists have assumed that planets generally settle on a "just right" interior temperature.

For example, heat from Earth's core rises through the mantle and is released through the crust, in a process known as mantle convection. Because mantle convection speeds up as interior temperatures rise, the heat released should more or less equal the heat produced in a planet's heart, the thinking has gone.

"This is akin to how warm-blooded animals lower their body temperature by sweating," Korenaga said.

By studying the Earth's mantle, however, Korenaga found that a planet doesn't necessarily reach this point of equilibrium,. As computer simulations have improved since the idea was proposed in the 1960s, more realistic modeling of mantle convection has revealed problems with the original theory.

"But the mantle is made of rocks, which are very complicated materials," he added.

By studying how Earth's rocks have deformed and how mantle convection has occurred in the past, Korenaga determined that the process isn't sensitive to the planet's internal temperature. So the release of heat at the surface — or "sweating" — doesn't necessarily wind up balancing with the heat generated in its interior, Korenaga said.

This interpretation isn't necessarily widespread, however.

"Korenaga is adopting a rather narrow definition of 'regulation,' but it's an interesting paper," David Stevenson, a planetary scientist at the California Institute of Technology who was not involved in the new study, told Space.com.

The new research was published last week in the journal Science Advances.

The surface temperature of a planet has profound impacts on its habitability. If temperatures climb too high, liquid water can't hang around, making it a challenge for life as we know it to evolve. When a planet self-regulates, that temperature can stabilize, but if a world is constantly sweating off heat, the surface could wind up too hot for water.

The details of a planet's formation and evolution should, therefore, provide clues about its final temperature, Korenaga said. He suggested that the material that helped to build the planet, along with any large asteroid or comet impacts the world may have experienced, could help determine its surface temperature.

"I would guess that a planet with a hot start remains hot, and vice versa," he said, though he cautioned that the planetary formation process remains poorly understood.

But such details are likely of minor importance in determining a planet's potential habitability, Stevenson said.

"Earth gets 5,000 times more energy from the sun than from the inside," Stevenson said. "Fiddling around with what's on the inside does play little direct role in our surface temperature."

According to Stevenson, habitability is more intimately tied to a planet's atmosphere, which he said is connected to, but not necessarily determined by, its interior.

But Korenaga pointed out that scientists' understanding of how a planet's interior affects its atmosphere is based on the long-running idea that planets self-regulate.

"The present-day atmospheric composition reflects a few billion years of geological activities, and our current understanding of the relation between the atmosphere and the interior depends heavily on the notion of self-regulating mantle convection," Korenaga said. "So we need to start from scratch to establish a true relation between the atmosphere and the internal temperature."

So a planet's residence in the "habitable zone" may not be a sufficient indicator of a planet's ability to support life, he added; it must also have an internal temperature that is just right.

However, it's not currently feasible to study the interiors of exoplanets, he added.

"All we can do is observe the surface — the atmosphere — and guess its internal state," Korenaga said.