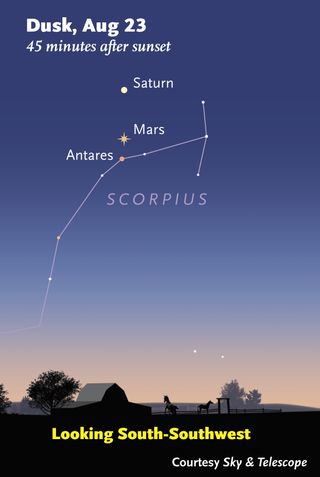 On Wednesday evening (Aug. 24) as darkness falls, check out the south-southwest sky to see an eye-catching planetary/stellar lineup consisting of three radiant points of light: two bright planets and one of the brightest and most colorful stars in the sky.Tuesday (Aug. 23) a somewhat less straight — but still striking — line-up of the three will be visible.

The two planets — yellow-orange Mars and yellow-white Saturn — will appear to form a nearly perfect vertical line in the sky with the 15th brightest star, the reddish supergiant Antares.

Interestingly, the name Antares means "rival of Mars." ("Anti" comes from the Greek word for "against," and Ares was the ancient Greek god of war, whereas Mars was the Roman war god.) In fact, Mars will pass 1.8 degrees above Antares, and it will shine at a brilliant magnitude of minus 0.4; Antares, by comparison, will shine at magnitude 1.0 (lower magnitudes appear brighter), making Mars more than three times brighter than its rival. [Planets 'Dance' With The Moon and Perseid 'Rain' In August 2016 Skywatching (Video)]

However, Mars will appear more of a yellow-orange color, whereas Antares is one of the reddest stars in the sky. So although Mars will appear much brighter, Antares will stand out for its bood-red color. Perhaps that is why the ancient stargazers considered it to be Mars' rival.

Saturn will be situated 4.2 degrees above Mars — the highest of the three bright objects. In terms of brightness, the ringed planet will play the "middleman" in the trio. At magnitude 0.4, Saturn will shine with only half the luster of Mars, and it will appear almost twice as bright as Antares. Saturn will appear to hover directly above both Mars and Antares; the distance between Saturn and Antares will measure 6 degrees. Your clenched fist measures roughly 10 degrees in width when held at arm's length, so the length of the Saturn-Mars-Antares lineup will stretch a bit more than half a fist.

Though all three points on the line resemble stars, only Antares will appear to twinkle. It is, after all, just a pinpoint of light from our vantage point. It is hundreds of times larger than our sun, at a distance of 550 light-years (3.3 quadrillion miles, or 5.3 quadrillion kilometers). But it looks like a glowing dot, even in large telescopes, whose light is easily distorted by our churning atmosphere — hence the twinkling effect.

In contrast, Mars is only 79 million miles (127 million km), and Saturn is 916 million miles (1.474 billion km) from Earth on that day; they appear as disks through telescopes, so they very rarely appear to twinkle.

The star and two planets will appear to be aligned perfectly at 6 p.m. EDT (2200 GMT), but at that time, it will still be daytime across much of North America; viewers will have to wait until darkness falls to easily see the line. Mars will be edging slowly away to the east (left); it will be moving much faster than Saturn, and by the time it gets dark along the West Coast, skywatchers there will see a line that is not precisely straight, with Mars a bit more to the east as compared to Saturn and Antares. That should be even more readily apparent on Thursday evening and in the days that follow, as the trio morphs into a slowly widening triangle.