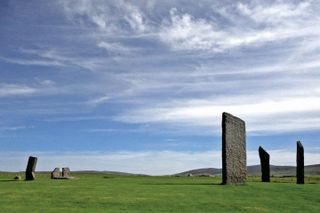 The great stone circle Stenness, in Orkney, Scotland. Scientists say the stones were arranged to track astronomical events by the sun and moon 5,000 years ago.
(Image: © Copyright Douglas Scott)

Ancient "stone circles" in Scotland were constructed in line with the sun's and moon's movements some 5,000 years ago, new research reveals.

Researchers used 2D and 3D technology to test the alignment patterns in the circles of Callanish (on the Isle of Lewis) and Stenness (in Orkney). These stones date back to about 3000 B.C., about 500 years before Stonehenge's famous stone monument was constructed in England. The team also looked at much simpler monuments in Scotland dating to about 1000 B.C.

"Nobody before this has ever statistically determined that a single stone circle was constructed with astronomical phenomena in mind; it was all supposition," Gail Higginbottom, project leader and a visiting research fellow at the University of Adelaide and Australian National University, said in a statement. [5 Strange Theories About Stonehenge]

"This research is finally proof that the ancient Britons connected the Earth to the sky with their earliest standing stones, and that this practice continued in the same way for 2,000 years," she added.

Researchers found that, for about half the sites, the northern horizon was higher and closer than the southern horizon. This would have made the summer solstice sun, marking the longest day of the year, appear to rise out of the highest peak in the North.

The other half of the sites had a southern horizon that was higher and closer than the northern horizon. In this case, the winter solstice sun (marking the year's shortest day) would have appeared at the highest point to the south, the researchers explained.

"These chosen surroundings would have influenced the way the sun and moon were seen, particularly in the timing of their rising and setting at special times, like when the moon appears at its most northerly position on the horizon, which only happens every 18.6 years," Higginbottom said.

The research was published in the Journal of Archaeological Science: Reports.