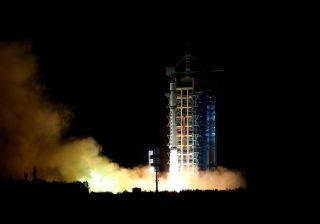 The nation's Quantum Experiments at Space Scale (QUESS) spacecraft lifted off atop a Long March-2D rocket from the Jiuquan Satellite Launch Center in the Gobi Desert Monday at 1:40 p.m. EDT (1740 GMT; 1:40 a.m. local time Tuesday, Aug. 16), according to media reports.

"In its two-year mission, QUESS is designed to establish 'hack-proof' quantum communications by transmitting uncrackable keys from space to the ground, and provide insights into the strangest phenomenon in quantum physics — quantum entanglement," China's state-run Xinhua news agency reported.

"Entangled" particles are intimately and curiously linked to each other; even if they're separated by billions of miles of space; a change in one somehow affects the others.

QUESS will send messages to ground stations using entangled photons, Xinhua reported. Such a system is theoretically impossible to hack. In addition, any attempts to eavesdrop would be picked up via an induced change in the photons' state.

Many nations are working to make quantum communication a reality, but China is the first to launch a satellite dedicated to developing the technology.

The 1,320-lb. (600 kilograms) QUESS satellite is designed to circle Earth at an altitude of about 310 miles (500 kilometers), completing one lap every 90 minutes, Xinhua reported.

QUESS will also test out "quantum teleportation," beaming precise information about the states of particles from the satellite to a ground station in Tibet, according to the news agency.

The satellite is nicknamed "Micius," after a Chinese scientist who conducted groundbreaking optical experiments in the 5th century B.C.

"Just like [NASA's] Galileo [Jupiter probe] and Kepler [space] telescope, we used the name of a famous scholar for our first quantum satellite," said QUESS project chief scientist Pan Jianwei, according to Xinhua. "We hope this will promote and boost confidence in Chinese culture."