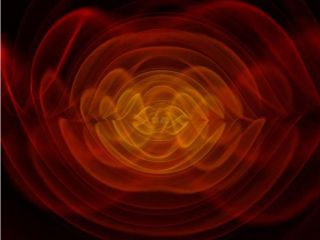 This is a visualization of gravitational waves, ripples in space-time predicted by Albert Einstein. This image appears on the cover of the National Academies Astro2010 Decadal Survey midterm report
(Image: © NASA/C. Henze)

The United States could reenter a space-based hunt for ripples in space-time, if NASA decides to follow the recommendation of a new report from the National Academy of Sciences, Engineering and Medicine.

The National Academies is responsible for producing a decadal report that provides funding agencies and the entire astrophysics community with a proposed roadmap for the coming years. The report gives suggestions for which projects and avenues of research the community should prioritize and pursue. The last decadal report was published in 2010.

Today (Aug. 15), the Academies released a report that reassessed the goals set in its 2010 report, in light of what's happened in the field over the last half decade. Among the conclusions of the mid-term report was the suggestion that the U.S., and NASA in particular, should renew support for the European-led LISA mission (now eLISA), which aims to put a gravitational wave detector in space. NASA withdrew its support of the mission in 2011 due to budget constraints. [Gravitational Wave Discovery Explained by Experts]

The recommendation that NASA reinvest in eLISA was driven by the direct detection of gravitational waves in 2015 by the Laser Interferometer Gravitational Wave Observatory (LIGO). The mid-term report also highlighted the repercussions of the expanded budget and delayed timeline of the James Webb Space Telescope, and the failure of Congress to grow the budget of the National Science Foundation (NSF) the way the Astro2010 report anticipated.

"The scientific discoveries and improvements in technology of the past five years steer us in a certain direction. Having this opportunity to give advice on midcourse corrections to the funding agencies is very important," Jacqueline N. Hewitt, a professor of physics and director of the Kavli Institute for Astrophysics and Space Research at the Massachusetts Institute of Technology, said in a press release from the National Academies. Hewitt is the chair of the committee that wrote the midterm report.

The decadal reports put out by the National Research Council cover a broad range of topics, including astronomy and astrophysics, Earth science and space studies. In any given scientific field there are typically more proposed missions and projects than the relevant agencies can afford to fund, so these decadal surveys help the field decide which projects to focus on and pay for. These reports often take years to put together, and incorporate the opinions and expertise of many scientists in each  field. The 2010 decadal survey for astronomy and astrophysics was titled "New Worlds, New Horizons," or NWNH. It is also referred to as the Astro2010 Decadal Survey, or simply Astro2010.

The newly released midterm assessment praised recent successes in the field, including: The explosion of exoplanets discovered primarily by the Kepler Space Telescope, which indicates "the possibility of more than a billion Earth-like planets among the exoplanets that are present around stars throughout the galaxy." according to the report. The report also lauded the continued success of the Hubble Space Telescope to look out into the distant cosmos, where scientists can learn about the very first stars and galaxies to form in the universe; and the completion of the Atacama Large Millimeter/submillimeter Array (ALMA), which has already been churning out science results, including measurements of the masses of monster black holes at the center of nearby galaxies.

But unexpected hurdles may also require a course correction for the field and for funding agencies, the report states.

In 2016, the Laser Interferometer Gravitational Wave Observatory (LIGO) announced the first- ever direct detection of gravitational waves — ripples in the universal fabric that Albert Einstein dubbed space-time. The finding came earlier than even optimistic predictions anticipated, and was followed a few months later by the announcement of a second detection.

To further study gravitational waves, the European Space Agency (ESA) is planning to build a space-based detector called the Laser Interferometer Space Antenna, or LISA (the word "Evolved" was later added to the front of the mission, changing its acronym to eLISA). The Astro2010 report recommended that NASA partner with ESA on the LISA mission, but NASA withdrew support in 2011 due to lack of funding. The LISA Pathfinder mission, designed to test technology that will be used in the full-fledged LISA mission, is currently underway (and doing quite well), with support from institutions in the U.S.

LIGO's detection of gravitational waves now provides astrophysicists with a new way to study the cosmos, and in some cases spot otherwise invisible objects, like black holes slightly more massive than the sun, colliding in space.

With that in mind, the midterm report recommends that NASA get involved with LISA once again.

"One goal of U.S. participation should be the restoration of the full scientific capability of the [LISA] mission as envisioned by [Astro 2010]," the report said.

"The early operation of [LISA Pathfinder] has been successful, and its results have demonstrated the feasibility of many of the key technologies needed by LISA," according to the report. "The committee believes that NASA and ESA together should rethink their strategy for LISA and take steps to reduce mission risk and to maximize its scientific return ..."

The James Webb Space Telescope (JWST) has been described as "Hubble's successor," because it will provide amazing images of distant cosmic objects in even higher resolution than Hubble. JWST is now scheduled for launch in late 2018, but the project underwent a "re-baselining" in 2011, in which the timeline for launch was pushed back and the budget expanded.

The Astro2010 report made its recommendations based on a projected budget for major funding agencies, including NASA. For NASA's Astrophysics Division and its allotted budget for the JWST, the report "assumed a flat budget in inflation-adjusted dollars," and that NASA's budget has "roughly tracked" that assumption."  However, the report also states that the setbacks with JWST "have delayed the availability of funding for new initiatives by about 4 to 5 years."

(The expansion of JWST's budget likely directly impacted NASA's decision to withdraw from the LISA mission.)

JWST's budget and schedule changes have also impacted other projects already underway, most notably the Wide Field Infrared Survey Telescope (WFIRST). The WFIRST could, among other things, hunt for dark matter and explore a wide range of cosmic phenomena, including exploding stars, the expansion of the universe and the search for exoplanets.

"The delay and increased cost of JWST has led to delay in starting WFIRST, the top-ranked NWNH large space initiative," the report says. "As a result, WFIRST … is working toward a launch in 2024-2026 rather than in 2020, as envisioned by [Astro2010]."

The midterm report suggests that before NASA makes its final decisions about what the WFIRST mission will include, the agency should commission independent parties to evaluate the scope and cost of WFIRST. If the cost seems so high that it could threaten "the balanced astrophysics program" recommended by NWNH for NASA, then the agency should "descope the [WFIRST] mission to restore the scientific priorities and program balance by reducing the mission cost."

Another major project in development over the past half-decade has been the Large Synoptic Survey Telescope (LSST), an 8-meter (26.2 feet) ground-based telescope with a 3.2 gigapixel camera that will survey the entire southern sky once every few nights. This will provide a "revolution" in the search for cosmic objects that are changing over short timescales. LSST is a top priority for the NSF and is on schedule to begin preliminary operations in 2020. The report applauded the NSF's progress on LSST, stating that the project is "well along the path envisioned by [Astro2010]."

But the midterm report noted that the investment in LSST recommended by the Astro2010 report was based on a projected budget that has not come to fruition. Astro2010 predicted a scenario in which the budget for the NSF Division of Astronomical Sciences "would double over the course of the decade," according to the press release. "However, the division’s budget has not even kept up with inflation."

The press release says that operational costs for some of the NSF's biggest facilities could eat up the available budget, leaving little for research.

"NSF and the National Science Board needs to take action to preserve the ability of the astronomical community to fully utilize NSF's capital investments in its forefront and other facilities," the press release said.