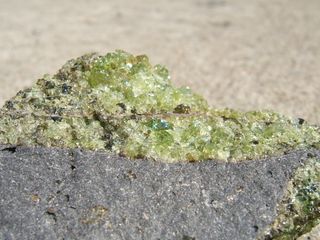 Forsterite is a key mineral that makes up rocky planetary bodies and is found in Earth's upper mantle. Pictured here: crystals of a variety of forsterite collected near Peridot, Arizona.
(Image: © Pyrope via Wikimedia Commons)

When rocky bodies collide in space, they produce a tremendous shock wave, abruptly increasing the pressure on the minerals within. In a new study, researchers zapped a main component of rocky planets with a laser and discovered something unexpected: Instead of simply melting under suddenly high temperature and pressure, crystals form in liquid as well.

Forsterite is a mineral made from magnesium, silicon and oxygen, and it's extremely common on rocky planets: Earth's upper mantle is 70 percent to 80 percent forsterite, and a class of stony meteorites that fall to Earth called ordinary chondrites can consist of as much a 90 percent forsterite, Toshimori Sekine, a geophysicist at Hiroshima University in Japan and lead author on the new study, told Space.com.

Despite that, researchers had not investigated what happens to the mineral during drastic, intense pressure increases, like what would happen during a planetary collision, because under pressures that high applied gradually, forsterite would have already decomposed into different minerals. However, by blasting a tiny sample of forsterite with a laser, the researchers in the new study found that when pressure suddenly reached 250 gigapascals — about 2/3 the estimated pressure at the center of the Earth — the substance unexpectedly generated crystals. [Closest Rocky Exoplanet Yet Found Is Earth-Sized (Video)]

"Forsterite was thought to change simply, like other minerals: solid, liquid, [supercritical] fluid [the phase that replaces gas at ultrahigh pressures] with increasing shock strength," Sekine said in an email. "Nobody realized partial crystallization before at such extreme conditions."

During the experiment, the researchers shone a high-powered laser at a miniscule square of forsterite bordered with quartz and aluminum. The laser's energy vaporized molecules on the sample's surface, creating a shock wave that heated the fosterite and put intense pressure on it, researchers said in a statement. (This laser-driven shock compression has been used in the past on other molecules to investigate the conditions inside planets.)

"Our results provide a better understanding [of] how impact-generated magmas evolve, and allow us to model Earth-type planets' inner structures," Sekine said in a statement. "Collisions at these extreme temperatures and pressures created our own Earth and may have also formed the mantles of other super-Earth planets [worlds close to Earth's size and mass], for example CoRoT-7b and Kepler-10b."

Because forsterite is so common in the mantles of rocky planets, the researchers drew a connection between how the mineral reacts to sudden pressure and what would happen to the chemical makeup of planet interiors after sudden impacts. The crystal that was created, magnesium oxide, may have a connection to planets' magnetic fields, the researchers said.

"Our results can support the possibility that violent, large-scale collisions between space bodies containing enough forsterite and moving faster than about 13 kilometers per second (8.1 miles per second) could lead to chemical layering in the mantels of massive terrestrial planets," Sekine said in the statement. "Melting forsterite may have produced a sufficiently high concentration of magnesium oxide in early Earth's core to power a magnetic field around the planet."

The new work was detailed today (Aug. 3) in the journal Science Advances.