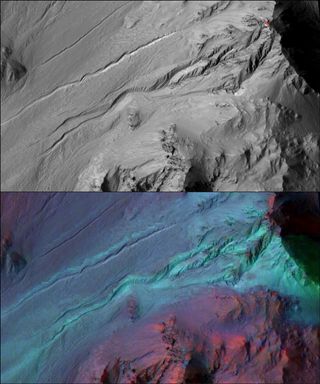 Gullies that lace the surface of Mars appear similar to those carved out on Earth by flowing water — but a new a deep look at the Red Planet turned up no evidence that the life-giving liquid is the cause of the Martian features.

The surface of Mars appears to light up in pastel shades of pink, purple, blue and green in a new image from NASA's Mars Reconnaissance Orbiter (MRO). The colors show the chemical composition of a region that includes a handful of gullies streaking across the surface like veins.

While some scientists had theorized that the gullies form in a fashion similar to gullies on Earth — typically via a process involving liquid water — new composition maps of more than 100 gully sites provide no evidence of "abundant liquid water or its byproducts" in the shallow channels, according to a statement from NASA. [The Search for Water on Mars in Photos]

Scientists have a few clues to work with when trying to unravel how the Martian gullies form — and from there, learn something about the relatively recent geologic activity on the planet. First, the Martian gullies are "a widespread and common feature" on Mars, mostly between the 30- and 50-degree latitudes in both hemispheres, and generally occur "on slopes that face toward the poles," according to the NASA statement.

Seasonal variations in surface features typically suggest that whatever is responsible for the features might be undergoing changes associated with ups and downs in temperature — such as water melting and freezing. For example, the seasonal appearance of dark streaks on the slopes of some Martian hillsides, known as recurring slope lineae (RSL), appears to be caused by the flow of very salty liquid water on the surface of Mars today.

Mars' gullies are different than the RSL, but, according to Nunez, some researchers had thought that liquid water might also be the mechanism forming the gullies. However, he noted that the "main mechanism" that the HiRISE researchers suspected was the freezing and thawing of carbon dioxide frost. (Evidence has been mounting in recent years to suggest that water is not the cause of the gullies' formation, including the results of a study from 2014 and another from 2010.)

To figure out which mechanism was at work, scientists want to look at the minerals present in the gullies.

"On Earth and on Mars, we know that the presence of phyllosilicates — clays — or other hydrated minerals indicates formation in liquid water," Núñez said in the statement.

Because different chemical elements absorb light differently, it's possible to "read" light coming from an object and see the different elements present therein with an instrument called a spectrometer. So the team aimed another MRO instrument at the gullies, the Compact Reconnaissance Imaging Spectrometer for Mars (CRISM). (HiRISE captures optical images, and thus couldn't provide any evidence about the minerals in or around the gullies.)

"In our study, we found no evidence for clays or other hydrated minerals in most of the gullies we studied," Núñez said. He noted that the clays they did see appeared to be ancient deposits that were exposed in the formation of the gullies, "rather than altered in more recent flowing water."

"These gullies are carving into the terrain and exposing clays that likely formed billions of years ago when liquid water was more stable on the Martian surface," he said.

The new study doesn't show conclusively that carbon dioxide frost is the culprit in forming the gullies, but it adds support to models that demonstrate that hypothesis.

The CRISM observation and analysis by Núñez and colleagues has been published in the journal Geophysical Research Letters.