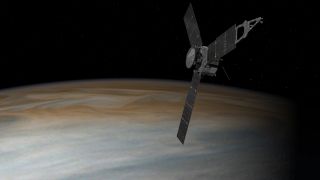 NASA's Juno spacecraft is about to start heading toward Jupiter for the first time since its July 4 arrival at the giant planet.

At 3:41 p.m. EDT (1941 GMT) today (July 31), Juno will reach the farthest point in its 53-day orbit around Jupiter — a spot about 5 million miles (8 million kilometers) away from the solar system's largest planet, NASA officials said.

Then, Jupiter's powerful gravity will pull Juno back in, and the spacecraft will begin zooming toward an Aug. 27 close approach that will take it within just 2,600 miles (4,200 km) of the planet's cloud tops. [Photos: NASA's Juno Mission to Jupiter]

The Aug. 27 pass should return the first real scientific bounty of the mission, team members have said. (Juno's instruments were off on July 4, to reduce complications during that day's pivotal orbit-insertion burn, but they will be operating on Aug. 27.)

"We're in an excellent state of health, with the spacecraft and all the instruments fully checked out and ready for our first up-close look at Jupiter," Rick Nybakken, Juno project manager at NASA's Jet Propulsion Laboratory in Pasadena, California, said in a statement.

Juno launched on Aug. 5, 2011, on a $1.1 billion mission to map out Jupiter's magnetic and gravitational fields, and determine the planet's interior structure and composition, among other goals. The spacecraft's observations should shed light on Jupiter's formation and evolution, which, in turn, should help researchers learn about how the solar system itself came together, team members have said.

After a looping deep-space journey that included a speed-boosting flyby of Earth in October 2013, the solar-powered Juno finally arrived at Jupiter on the night of July 4, settling into its initial orbit after a perfectly executed 35-minute-long engine burn.

Juno will conduct another 53-day orbit after the Aug. 27 close approach. Then, in October, the probe will perform one more engine burn to shift into a 14-day orbit.

At that point, the probe's science mission will officially begin. Juno will loop around Jupiter more than 30 times, observing the gas giant with its suite of science instruments. The mission is scheduled to end in February 2018 with an intentional death dive into Jupiter's thick atmosphere.

"For five years, we've been focused on getting to Jupiter. Now we're there, and we're concentrating on beginning dozens of flybys of Jupiter to get the science we're after," Juno principal investigator Scott Bolton, of the Southwest Research Institute in San Antonio, said in the same statement.