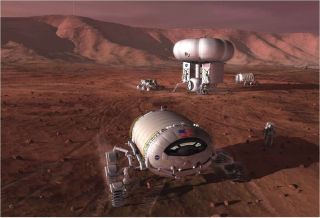 Early pioneering work on Mars is expected to help develop the means to sustain a colony of people.
(Image: © NASA/Pat Rawlings)

Long-term human colonization of Mars is feasible, as long as Red Planet pioneers "live off the land," a recent NASA report concludes.

"There are massive resources on Mars obtainable from the atmosphere and extracted from the regolith which are capable of supporting human colonization," write the authors of the report, which is called "Frontier In-Situ Resource Utilization for Enabling Sustained Human Presence on Mars."

Using Martian resources, existing technologies could supply water, oxygen, fuel and building materials, the report adds, "to relax the dependence on Earth during the buildup of a colony on Mars." [Red Planet or Bust: 5 Crewed Mars Mission Ideas]

The report, which was published in April, was written by Robert Moses and Dennis Bushnell, both of whom work at NASA's Langley Research Center in Hampton, Virginia.

Moses and Bushnell said that the purpose of their work is fourfold:

"If the best that we can hope for is to get Matt Damon [star of the recent film "The Martian"] back to Earth alive, then we may have failed miserably in our pursuit of pioneering Mars and achieving Earth Independence," Moses said.

Extensive ISRU application may offer a solution that allows the Mars pioneers to come back to Earth when and if they want to, he said — "not because they have to."

NASA has followed a strategy of "follow the water" for space exploration, Moses said.

But with respect to pioneering Mars, and defining some potential ISRU missions, the space agency should seek to "bottle the water," Moses said.

"Until we demonstrate that we can do that reliably on Mars using resources there, then there's no compelling foundation for extensive ISRU and pioneering there," he said.

The report suggests that NASA should match up ISRU with frontier technologies, including robotics, machine intelligence, nanotechnology, synthetic biology, 3D printing and autonomy.

"These technologies, combined with the vast natural resources, should enable serious, pre- and post-human arrival ISRU to greatly increase reliability and safety and reduce cost for human colonization of Mars," the technical paper explains.

For example, plastics can be produced from carbon, hydrogen and oxygen processed from Martian water and the planet's atmosphere, according to Bushnell, the chief scientist at NASA Langley.

Bushnell told Space.com that plastics will likely be designed crudely on Mars, except where they absolutely have to be finished.

"What is produced can be oversized as required for whatever strength is required," he said. "Plastic equipment, parts, structural members, buggies, habs [habitats], pipes, etc., can be heavy and large to make up for lack of materials properties excellence."

Such work can begin on Mars before any humans get there, thanks to autonomous robots, Bushnell said.

By exploiting all Martian resources, he added, small initial payloads of stuff can eventually produce major effects, products and functionalities.

"Mars is different from Earth … time is our friend," Bushnell said.

The extensive implementation of ISRU on Mars could possibly be the "game changer" that achieves the requirements necessary "for pioneering and ultimately colonization," the report suggests.

Moses and Bushnell stress that the Red Planet can become the "proving ground" for many new technologies "that not only improve Earth independence but set up Mars to become the supply source for fuels, oxidizers, life support, spare parts, replacement vehicles, habitats and other products" for spacefaring beyond low-Earth orbit.

The full technical paper can be found at:
http://ntrs.nasa.gov/archive/nasa/casi.ntrs.nasa.gov/20160005963.pdf

Leonard David is author of "Mars: Our Future on the Red Planet," to be published by National Geographic this October. The book is a companion to the National Geographic Channel’s six-part series coming in November. A longtime writer for Space.com, David has been reporting on the space industry for more than five decades. Follow us @Spacedotcom, Facebook or Google+. Originally published on Space.com.