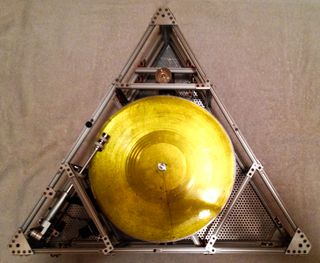 White's Third Man Records aims to play a record high up in Earth's atmosphere on Saturday (July 30), using a balloon and a special "space-proof" turntable called the "Icarus Craft."

The record chosen for the occasion — which will mark Third Man's seventh anniversary — is "A Glorious Dawn," a collection of the late astronomer Carl Sagan's words from his famous "Cosmos" TV series. The sky-bound copy of "A Glorious Dawn" is the 3 millionth record pressed by Third Man, label representatives said. [Video: See a Stunning Sunrise from the Edge of Space]

The label will also host launch parties featuring live music Saturday at its two locations, in Detroit and Nashville.

"Third Man Records is over the moon with excitement to pursue and share with you the Icarus Craft's mission to spin a record further from Earth than a record has ever been spun," Third Man representatives wrote in an update Monday (July 25). "Plan to join us and witness history in the making! You got something better to do?"

"A Glorious Dawn" won't set the mark for the greatest distance ever traveled by a record. That distinction belongs to the "Golden Record," which researchers and educators (including Sagan) put aboard NASA's twin Voyager spacecraft as a way to teach potential alien life-forms a bit about Earth and humanity.

Voyager 1 and Voyager 2 launched a few weeks apart in 1977 and are now both more than 10 billion miles (16 billion kilometers) from Earth. Voyager 1 entered interstellar space in August 2012, and Voyager is poised to do so soon as well.

While the Golden Record is designed to be operated by any intelligent aliens who may intercept the Voyager probes, the two spacecraft have not played the disc themselves.