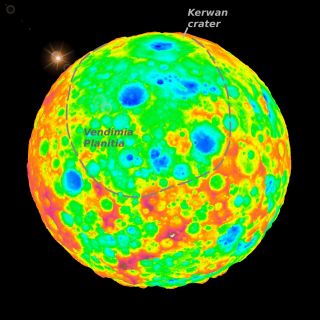 Ice volcanoes on Ceres might help solve the mystery of why large craters seem to be missing on the dwarf planet's surface, a new study shows.

With a diameter of about 585 miles (940 kilometers), Ceres is largest member of the asteroid belt located between Mars and Jupiter. Large portions of Ceres' surface are "saturated" in craters that are about 37 miles (60 kilometers) wide or smaller, likely created by meteorites crashing into the dwarf planet's surface, according to the new study. However, the largest confirmed impact crater on Ceres is only about 175 miles wide (280 km).

Prior work that analyzed pockmarked Vesta, the second largest asteroid in the asteroid belt, suggested that Ceres should have at least six to seven craters that are 250 miles (400 km) in diameter or larger. Similarly, earlier research that modeled the evolution of planets from planetesimals — the building blocks of planets — suggested that 10 to 15 craters greater than 250 miles (400 km) wide should have formed on Ceres during its lifetime of about 4.55 billion years. [The Dwarf Planet Ceres: Amazing Photos]

To help solve the puzzle of Ceres' missing craters, the researchers used data from the NASA Dawn mission, which began orbiting Ceres in April 2015. They used the data to model how the asteroid (which is actually large enough to be considered a dwarf planet) might have evolved over time. The researchers ran about 1,000 computer simulations of collisions that Ceres might have experienced over its lifetime, assuming that it held its current position in the asteroid belt over the past 4.55 billion years, according to the paper. (The best current estimate for the age of the solar system is 4.56 billion years, and the researchers estimated that Ceres formed within 1 million to 10 million years after the solar system was born.)

All in all, the models predicted that the chances of Ceres having so few craters was less than 2 percent.

"The lack of large craters was an absolute surprise. This is in stark contrast with other asteroids — for example, Vesta," study lead author Simone Marchi, a planetary scientist at the Southwest Research Institute in Boulder, Colorado, told Space.com. "Thus, it points to something special about Ceres, something that we could not have guessed."

The researchers suggested that many large craters on Ceres have been obliterated beyond recognition. Researchers had several potential explanations for how this could have happened; for instance, the surface of Ceres may have simply relaxed over time and become less crinkly.

Another explanation may be ice volcanoes.

Whereas regular volcanoes on Earth erupt molten rock, ice volcanoes, which are also known as cryovolcanoes, are thought to spew out plumes of water-ice and other frozen molecules. Recent work suggests that Ceres may consist of up to 25 percent water- ice by mass (in its interior), and so may experience cryovolcanic activity.

The scientists proposed that cryovolcanic eruptions might have dramatically transformed the surface of Ceres, erasing many craters. For instance, the researchers found faded evidence of one or possibly two craters about 500 miles (800 km) in diameter.

Large craters would have mostly formed on Ceres early in its history, when there were more big rocks careening around the solar system. Over time, most of these rocks would have collided with other objects and gotten smashed to bits, leading to smaller and smaller craters on Ceres. Cryovolcanism may have been more common on Ceres during its earlier years, when its interior was warmer, and the volcanoes may have eliminated many of the larger craters. As cryovolcanism on Ceres died down, more and more craters would have survived, leaving behind mostly smaller ones, Marchi said.

"We will try to nail down what the obliteration process was," Marchi said. "There [may even be] other processes that we have not thought of."

The scientists detailed their findings online July 26 in the journal Nature Communications.