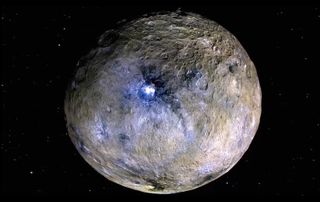 This false-color image of Ceres from NASA’s Dawn probe highlights the differences in surface materials across the dwarf planet.
(Image: © NASA/JPL-Caltech/UCLA/MPS/DLR/IDA)

NASA's Dawn spacecraft has completed its historic primary mission, during which the probe became the first ever to visit a dwarf planet and the first to orbit two different bodies beyond the Earth-moon system.

Dawn's primary mission came to an end Thursday (June 30). But the spacecraft isn't shutting down; Dawn is still studying the dwarf planet Ceres from orbit, and the probe may soon head out to visit a third cosmic object, if NASA approves a proposed extended mission.

The $467 million Dawn mission launched in September 2007 to study Vesta and Ceres, the two largest objects in the main asteroid belt between Mars and Jupiter.

"Dawn has revealed that while Vesta is a dry body, Ceres could be as much as 25 percent water ice by mass," NASA officials said in a statement. "Dawn also discovered many intriguing features at both bodies — Vesta is home to a mountain whose height is more than twice that of Mount Everest, and Ceres has a crater called Occator with mysterious bright features that continue to spark scientific investigation."

During the course of its primary mission, Dawn traveled more than 3.5 billion miles (5.6 billion km), orbited Vesta and Ceres a combined 2,450 times and beamed home a total of 69,000 images of both bodies, NASA officials said.

The spacecraft's work isn't done, however. Dawn is still observing Ceres, and mission team members recently proposed to fly the probe to a third object in the asteroid belt on an extended mission. (Dawn scientists have not revealed the identity of the targeted body.)

NASA must decide soon whether or not to approve the extension; if Dawn doesn't leave Ceres by July 12, the spacecraft won't have enough hydrazine fuel left to make the journey to the third object, Spaceflight Now reported yesterday (June 30).

If Dawn stays put at Ceres, it should have enough hydrazine to keep operating until early 2017, mission officials have said.