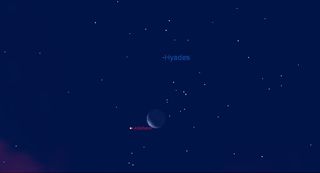 As I type this particular column, I've noticed that the weather nationwide is unseasonably warm to just downright hot. In fact, it has been one of the hottest and driest Julys in many decades from coast to coast.

And yet, already there are signs that winter is coming. [The Best Night-Sky Events of 2016: What to Watch for This Year]

Assiduous stargazers who are still up at the first light of dawn have no doubt noticed that low in the east-northeast sky, we are beginning to see the stars that will adorn our wintertime evening sky during those frosty nights of December, January and February. Already, at 3 or 4 in the morning, we can catch sight of the brilliant yellow star Capella in Auriga, the Charioteer — and if you have a clear eastern horizon, you just might make out the upper torso of the Mighty Hunter, Orion, with his upraised shield. Lurking just above him is the zodiacal constellation of Taurus, the Bull, with the famous Pleiades cluster in the Bull's shoulder. The Bull's face is plainly marked by the fine, V-shaped cluster of the Hyades. A bright orange star at the end of the lower arm of the V represents the Bull's fiery eye. That's orange-red Aldebaran, "the follower"; it rises soon after the Pleiades and pursues them across the sky. Aldebaran, however, is a foreground star that does not belong to the Hyades; it's just an innocent bystander.

The predawn appearance of these out-of-season stars and constellations demonstrates that the progression of the seasons is unending — and we can now look down the long celestial runway and see the first signs that colder weather is coming (although it's still a few months away).

These celestial gems are all pretty enough to perhaps entice you out of your bed at an early hour, but if not, maybe a beautiful, thin crescent moon pausing next to the Hyades might be enough to get you outside.

Or, if you live in the southern or eastern U.S., perhaps the promise of a stellar eclipse might draw you out!

New moon in the arms of the old

As dawn arrives over North America on Friday morning, July 29, the view of the Hyades will be enhanced by a thin, waning crescent moon, 21 percent illuminated, which is also floating very near to Aldebaran. This lovely configuration will come up above the horizon shortly after 2 a.m. local daylight time, and will be in good position to be seen low in the east about 60 to 90 minutes later.

To the unaided eye and especially through binoculars or a small telescope, the waning crescent moon will appear as a slender arc of yellowish-white light enclosing a ghostly bluish-gray ball. This vision of the full globe of the moon is sometimes called "the old moon in the young moon's arms," a phrase usually reserved for when we see a crescent moon in the evening sky.

But this is a morning crescent moon, just four days from being a new moon. So maybe we should call this the young moon in the old moon's arms!

Leonardo da Vinci (1452-1519) was the first person to recognize the ghostly light as sunlight that is reflected off Earth to the moon and reflected back to Earth. This treble journey of reflected sunlight is known to us as Earthshine; that faint, bluish-gray light that appears on the moon's dark side is caused by the reflected light of Earth.

If an astronaut were to stand on the moon's surface, he or she would see our planet in a gibbous phase, with 79 percent of its surface illuminated — the exact opposite of what Earthlings are seeing with the phase of the moon. We call this correspondence "complimentary phases." As seen from the dark part of the moon, the sun is below the horizon, so the only light being provided is by our Earth, with sunlight reflecting off our white clouds and blue oceans. Depending on the amount of cloud cover, which of course is constantly changing, a full Earth can shine anywhere from 45 to 100 times more brightly than a full moon.

If you're using binoculars, take note of how the moon shifts relative to Aldebaran and the Hyades as the morning progresses — moving ahead by its own apparent diameter each hour.

Early that same Friday morning, the moon will either pass very close to or occult (hide) the orange Aldebaran in a stellar eclipse. South of a line that extends roughly from Las Cruces, New Mexico, to Houlton, Maine, Aldebaran will be covered by the moon. The star will disappear along the moon's bright side and will pop back out into view along the dark side. If you live in most of Texas or Oklahoma (not including the Panhandle), you'll be able see the occultation in almost total darkness. Across much of the Midwest and Deep South, it will happen during various phases of morning twilight; the farther east you're located, the brighter your eastern sky will be. In the Northeast, the occultation occurs around or soon after sunrise. You will need good binoculars or a small telescope to bring out Aldebaran against the blue daytime sky. If you live in the Far West, the occultation takes place before moonrise; when the moon moves far enough above the horizon, it will have already passed Aldebaran and will be situated just to the left (east) of the star. You can see a map here that outlines the zone of visibility as well as lists visibility times for over 200 locations in the United States and hundreds more for other locations. North of the line, observers will see the moon narrowly miss Aldebaran.

And here's a bonus if you live in the eastern U.S.: The moon will also occult the close pair of third-magnitude stars, Theta-1and Theta-2Tauri (in the Hyades), about 3 hours before it reaches Aldebaran (around 3 a.m. EDT). This will happen in total darkness, but the moon will also be much lower to the horizon.