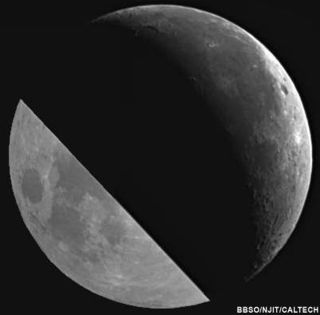 The sunlit crescent portion of the Moon is blocked by a filter. This allows researchers to measure earthshine on the Moon, as seen in the lower left of this image, created by the Big Bear Solar Observatory lunar on Dec. 12, 1999.
(Image: © BBSO/NJIT/CALTECH)

The moon will be full Thursday, which means we'll see it inall its illuminated glory. But when the moon is just a sliver, we sometimes seeour own reflection shining back at us from the moon's shrouded side, in aphenomenon called "earthshine."

Now scientists say the difference in light reflection fromthe Earth?s land masses vs. the oceans can be seen on the moon. By tracking changesin earthshine as Earth rotates, scientists measured brightness variationsthat correspond to the brilliant, mirror-like reflections from oceans comparedto the dimmer reflections from land.

Earthshine was first proposed by Leonardo da Vinci, whosuggested that sunlight could bounce off our planet and be reflected back to usby the moon. This light is only visible when there is little sunlightreflecting directly off the moon, which would otherwise drown out the muchdimmer earthshine. Thus, Earth's reflection is only visible to the naked eye onthe darker portion of thin crescentmoons, and not full moons.

The phenomenon can sometimes be seen by the naked eye as a ghostlyglow, and is easily visible with a telescope. It is best seen once a month whenthe crescent moon hangs just above the western horizon right after sunset.

Full moons occur when the sun, Earth and moon are lined up.The moon will look pretty much full tonight and Thursday night. But it is nevertruly full. In fact, because the moon's orbital plane around Earth isslightly different than Earth's plane in relation to the sun, the three objectsrarely line up perfectly, and when they do, the moon falls into shadow and an eclipseoccurs.

Sally Langford, a physics graduate student at the Universityof Melbourne, used the observatory at Mount Macedon in Victoria, Australia, tomeasure changes in reflected earthshine as our planet rotates. She observed themoon for about three days each month while it was rising and setting.

"When we observe earthshine from the moon in the earlyevening, we see the bright reflection from the Indian Ocean, then as the Earthrotates the continent of Africa blocks this reflection, and the moon becomesdarker," Langford said.

The discovery, detailed in this week's issue of the journal Astrobiology,could help scientists learn more about distantplanets around other suns, she said.

"In the future, astronomers hope to find planets likethe Earth around other stars. However these planets will be too small to allowan image to be made of their surface. We can use earthshine, together with ourknowledge of the Earth's surface to help interpret the physical makeup of newplanets."

Changes in the apparent brightness of an exoplanet'sreflection could signal that continents and oceans are rotating through.

"If we find Earth-sized planets and watch theirbrightness as they rotate, we will be able to assess properties like the existenceof land and oceans," she said.