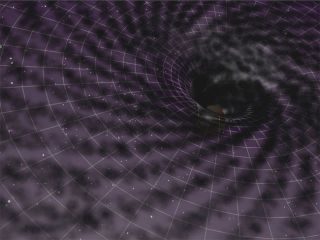 An artist's schematic impression of the distortion of space-time by a supermassive black hole. Smaller black holes are thought to be responsible for the distortions in space-time (known as gravitational waves) detected by the LIGO experiment.
(Image: © Felipe Esquivel Reed)

Take two massive stars, collapse them into black holes, bake for 10 billion years, and combine. That's the recipe scientists have cooked up to produce the first detected gravitational waves spotted last September, and one that produces the most recent detection, as well.

New work shows that that the two stars — the seeds for the first gravitational wave detection — became black holes only a few million years after their birth, then merged more than 10 billion years later. The second pair followed a similar path.

To figure out the primary ingredients of the gravitational waves detected by the Laser Interferometer Gravitational-Wave Observatory (LIGO) in 2015 (and reported this year), the team of scientists modeled pairs of stars throughout the lifetime of the universe. They found that most of the black hole mergers LIGO should expect to see would have happened only a few billion years after the Big Bang kicked off the universe 13.82 billion years ago. [LIGO's Gravitational Waves Discovery Enthusiastically Explained By Space Reporter (Video)]

Black hole mergers start with a pair of stars, each ranging from 40 to 100 times the mass of the sun. Binary stars are common; more than half the stars in the universe are part of a stellar couple. The more massive star evolves faster, and begins to transfer material to its companion as it nears the end of its lifetime.

What happens next is still unknown. Single stars with enough mass often explode as a supernova, blowing off excess material and leaving behind a dense core that collapses inward to form a black hole. But some studies have suggested that binary stars can jump straight to the black hole stage without the violent supernova stage, and this was incorporated into the models used by the new study's lead author Krzysztof Belczynski and his team.

The stars that created the ripple spotted by LIGO formed when the universe was about 2 billion years old, Belczynski's research suggests, making them some of the oldest and brightest stars. It took only about 5 million years for the stellar couple to both become black holes, what Belczynski called "a blink on the universe time scale." But after the rapid changes came a period of waiting; it took just over 10 billion years for the pair to merge. The collision of the black holes produced waves in the space-time surrounding them, which were ultimately detected on Earth by LIGO.

One way to determine the age of the original stars comes from understanding their metallicity, the amount of material other than hydrogen and helium the contain. Stars with additional ingredients have stronger winds carrying away their material, reducing their mass. The team found it more likely that stars with little pollution from other elements would interact to form black hole pairs.

"It is about 50 to 100 times more likely that a massive binary will form a black hole-black hole merger at low metallicities than at high metallicity," he said.

The first generations of stars in the universe were made up of hydrogen and helium, and fused other elements within their cores. When they exploded, they scattered the material into space, spreading the gas and dust that would build the next generation of stars. As a result, stars become more polluted with heavier elements over the lifetime of the universe. Therefore, most of the stars likely to produce black hole mergers most likely formed in the first generations, when the stars had lower metallicity.

While LIGO probably didn't spot a collision between the very first stars, those first stars may have produced their own black hole mergers and subsequent gravitational waves. No direct observations have been made of the first stars, making them difficult to model.

"We do not see these first stars, so we have no observational information on how they evolve, so it is hard to predict things for them," Belczynski said.

His team focused on subsequent eras of stars, which scientists have observed.

"For other, later generations of stars, we can see them and we can model them better, and the results are more secure," he said.

According to J. J. Eldridge, a physicist at the University of Auckland in New Zealand, these stars would still have appeared relatively early in the unvierse's history, and could have played a role in lighting up the early universe during its Dark Ages. After the Big Bang, hydrogen created a curtain of darkness that kept certain wavelengths of light from passing through. Only after the first generations of stars heated up the hydrogen did light begin to shine in the early universe.

The relatively early age of binary pairs that sent out the ripples detected by LIGO suggests that binary stars existed early in the universe, Eldridge said. This confirms work he and Elizabeth Stanway, at the University of Warwick in England, have done studying binary stars.

"We suggested that binaries have to be common in the early universe," Eldridge said. "GW 150914 [LIGO's first detection] possibly coming from such a binary system at this time is a nice bit of extra evidence of how important binaries are to understanding the universe."

According to Belczynski, some parts of the today's universe could still form stellar pairs that could wind up as colliding black holes down the road.

"The pollution of the universe was not uniform, and even in present times, we have patches of stars and entire galaxies of low metallicity," Belczynski said.

"This is why we also predict that some black hole-black hole mergers may form in the present universe."

The early stars aren't the only ones capable of producing black hole mergers. Recent evidence also suggests that black holes could have formed in globular clusters, huge collections of stars that travel close together.

"These are systems that pack stars very tightly," Frederic Rasio of Northwest University said last week during a news conference at the 228th meeting of the American Astronomical Society.

According to Belczynski's simulations, the rates of black hole mergers produced in the simulations are 40 times smaller than those formed through the combination of early, low-metallicity black holes, making it more likely that LIGO's observations caught a glimpse of the first combinations. Eldridge agreed that it was more likely, though he noted the formation of the first gravitational waves in a black hole mosh pit could not be ruled out.

"I suspect that both channels contribute to the merger rate," Belczynski said.

"Once we have lots and lots of LIGO detections, we will have mergers coming from both."