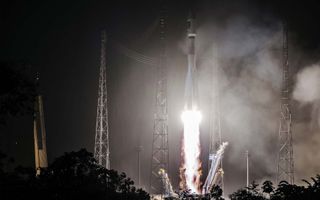 Two European Galileo satellites (the 13th and 14th of 26 total to be placed) were successfully launched today (May 24) atop a Europeanized Russian Soyuz rocket and released into space. The launch took place in French Guiana at Europe's Spaceport. [See more amazing rocket launches.]