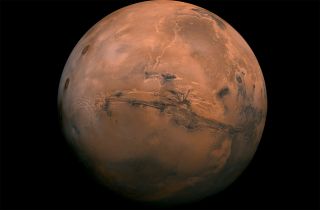 In recent years, the Red Planet has been doing something quite weird and scientist are stumped.

On a handful of occasions bizarre "plumes" have been observed protruding from Mars' upper atmosphere. A 2012 event was spotted by amateur astronomers and the phenomenon persisted for several days. Even the Hubble Space Telescope has been witness to a plume.

At first it was assumed some form of high-altitude cloud may be to blame, or maybe a storm kicked up dust into the upper atmosphere. But each hypothesis had its flaws and planetary scientists were left confused.

Interactions between the sun and planetary environments are well known. As highly energized particles from the solar wind hit Earth's global magnetic field, for example, they can get trapped in the magnetosphere and funneled to high latitude regions. This influx of solar wind ions will collide with high-altitude atmospheric gases, causing them to glow, creating auroras. Where ever there's a magnetic field and an atmosphere, the sun can kick off a dazzling lightshow and we’ve seen auroras throughout the solar system, including Jupiter, Saturn and even Venus.

PHOTOS: The Mysteries Behind the Dunes of Mars

But solar interactions are not limited to auroras. When Earth is hit by coronal mass ejections — basically bubbles of magnetized plasma ejected from the sun's lower atmosphere — the entire planet's magnetic configuration can feel its effects, setting up powerful electrical currents through the atmosphere and energizing our ionosphere.

Mars, however, does not possess a global magnetic field to deflect the worst the sun can throw at it. When a CME hits Earth, the magnetosphere protects the atmosphere, but on Mars, lacking this magnetic shield, it suffers atmospheric erosion. Though it is thought Mars once had a thicker atmosphere, over billions of years, the constant flow of solar wind particles have stripped it away. Mars' atmosphere is, literally, leaking into space.

If space weather has such a powerful influence on Mars' atmospher loss, could it also be to blame for these odd plumes? Mars Express scientists have turned to their veteran Mars orbiter for answers.

The 2012 Mars plume made world headlines and Mars Express was there collecting data of the local space environment. Did a space weather event occur around the time the plume was observed?

"Our plasma observations tell us that there was a space weather event large enough to impact Mars and increase the escape of plasma from the planet's atmosphere," said David Andrews of the Swedish Institute of Space Physics in an ESA news release. "But we were not able to see any signatures in the ionosphere that we can categorically say were due to the presence of this plume."

There is circumstantial evidence that Mars' ionosphere — an upper layer of the atmosphere filled with charged particles, or ions — was in some way influenced by a space weather event, such as the impact of a CME. But because of the plume's location, it is a challenge acquire additional observations of the event, so just because there is some evidence a CME-triggered event is at play, it's circumstantial at best.

Now scientists are looking over archival data in the hope of finding occasions when a plume occurred during a CME hit. In 1997, for example, a Mars plume was spotted by Hubble and at around the same time, a fast CME was recorded as hitting Earth. Unfortunately there was no information from any Mars mission as to how that CME impacted the Red Planet's atmosphere, if it affected it at all.

"The jury is still out as to what physics is at play here, but given the altitude of the plume, we think that plasma interactions must be important," said Andrews. "One idea is that a fast-travelling CME causes a significant perturbation in the ionosphere resulting in dust and ice grains residing at high altitudes in the upper atmosphere being pushed around by the ionospheric plasma and magnetic fields, and then lofted to even higher altitudes by electrical charging."

This, argues Andrews, could produce an obvious plume in the upper atmosphere that can be seen from Earth. It's basically an atmospheric bruise cased by CME impact. But like all good mysteries, more data is needed, but it looks like we may finally be closing in on a possible explanation for these bizarre Martian plumes.