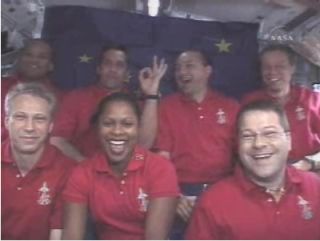 STS-116 shuttle pilot William Oefelein, backdropped by the flag of his home state Alaska, gives students an OK sign as he and his crewmates spoke with a Challenger Learning Center of Alaska.
(Image: © NASA TV.)

CAPECANAVERAL, Fla. -- NASA's spaceshuttle Discovery and its seven-astronaut crew are cleared to comehome Friday, though where they will ultimately land remains in question.

A finalinspection of Discovery heat shield by its STS-116 crew yielded noconcerns, Shannon said, adding that landingsite weather is the mission's only question mark.

Discovery'sSTS-116 crew is due to land at KSC's Shuttle Landing Facility at about 3:56p.m. EST (2056 GMT), but carry enough supplies to hold out until Saturday ifrequired [image].

Theastronauts are completing a 13-daymission to the InternationalSpace Station (ISS), where they rewiredthe orbital laboratory's power grid, ferried a newcrewmember to join its Expedition 14 crew and installeda new piece of the outpost's main truss. Earlier today, the crew deployed asmall experimental satellite dubbed ANDE to measure the effects of atmosphericdrag on spacecraft [image].

The threatof rain -- which can damage shuttle heat shields if flown through -- and lowclouds currently plague a planned KSC landing. High winds anticipated at California's Edwards Air Force Base are also a concern Friday.

MissionControl told Discovery's STS-116mission commander Mark Polansky Thursday that it will be a real-time callFriday on where the seven astronauts eventually land.

At NASA'sthird landing option - Northrup Strip at White Sands Space Harbor in New Mexico - the weather Friday is expected to be acceptable, but the runway lacksmuch of the basic hardware and infrastructure to handle an orbiter after itreturns to Earth.

"We'vetrained extensively at all three sites, so we're very familiar with all ofthem," Polansky told ABC News in an interview on NASA TV. "We would hopeto go to Florida and KSC. That's where the vehicle will be processed for itsnext mission, that's where our families will most likely be waiting for us, sothat's always a plus."

NASA has landedan orbiter at White Sands' Northrup Strip only once in its 25-yearhistory of shuttle flight during the STS-3 mission in 1982 aboard Columbia,which suffered brake damage and extensive contamination from gypsum dust.

Since then,a new towing area and concrete pad have been installed to protect the orbiteragainst the dust from the gypsum-covered lakebed runway [image].

"So we feelreally good that the gypsum problem is taken care of once we get the vehicleoff the lakebed," Shannon said, adding that runway is flat and laser-leveled. "Itis just one of the best places you'd ever want to land anything."

NASAofficials expect it would take between 45 and 60 days to return Discovery toKSC from White Sands, as compared to the traditional week of extra activityrequired to safe an orbiter at Edwards, hoist it atop its modified 747 jetcarrier craft for the ferry ride back to its Florida launch site.

IfDiscovery's crew waits until their 203rd orbit to land, they couldaim first for Edwards and then preferably KSC around 5:30 p.m. EST (2230 GMT),though White Sands is also available on that pass.

Additionallanding opportunities arise during the shuttle's next orbit, first at 7:00 p.m.EST (0000 Dec. 23 GMT) at Edwards, and then on White Sands' Northrup Strip twominutes later.

One lastlanding opportunity at Edwards during Discovery's 205th Earth orbit wouldput touchdown at 8:36 p.m. EST (0136 Dec. 23 GMT) before its crew would have toreset for Saturday.

"Thestrategy going into tomorrow is to pick a safe landing site," Knight said. "Andif it's safe to do so, we will land the vehicle."