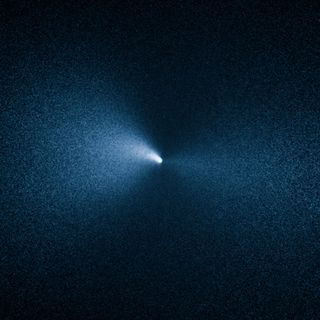 A shining jet of dust whirls around a comet zooming past Earth in newly released time-lapse images from the Hubble Space Telescope.

When Comet 252P/LINEAR flew by Earth in late March, it passed within just 3.3 million miles (5.2 million kilometers) of Earth, or about 14 times the distance between Earth and the moon. That makes this comet "one of the closest encounters between a comet and our planet," not to mention "the closest celestial object Hubble has observed, other than the moon," Space Telescope Science Institute officials said in an image description. The Hubble team created a new time-lapse movie of the comet flyby using the space telescope's imagery.

Hubble caught this sequence of photos about two weeks after the comet's closest approach, spotlighting the sunlight reflecting off of the object's jet of ice and dust. The comet's nucleus is too small for Hubble to see, officials said in the caption, but the spinning jet indicates that the little nucleus was rotating as it flew. By now, the comet has traveled more than 25 million miles (40 million km) away from Earth.

The object is around 750 feet (230 meters) wide, and it was first discovered by MIT's Lincoln Near Earth Asteroid Research (LINEAR) survey in 2000. The day after 252P passed Earth, in March, another, smaller comet passed even closer; researchers said this object might be a piece broken off of 252P.

The dynamic nature of the comet can be seen clearly in the time-lapse movie from Hubble's images, Hubble officials said.

"The movie underscores the dynamics and volatility of a comet's fragile nucleus," they wrote in the image description.