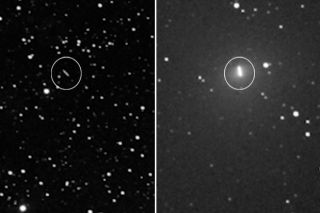 A pair of comets zoomed past Earth over the past few days, and their historic one-two flyby punch was caught on video.

A telescope in Chile operated by the online Slooh Community Observatory captured video of the comets 252P/LINEAR and 2016 BA14 as they cruised past Earth on Monday and Tuesday (March 21 and March 22), respectively.

Comet 252P's flyby was the fifth-closest in recorded history, scientists have said.

The Slooh views show the roughly 750-foot-wide (230 meters) 252P/LINEAR as a bright object with a noticeable tail. The comet is nearly bright enough to see with the naked eye at the moment, Slooh representatives said. (So far, 252P has only been visible to observers in the Southern Hemisphere, but it's moving north in the sky and should come into range for some northern viewers soon.)

Comet 2016 BA14, which is only about 375 feet (115 m) across, is considerably dimmer and appears as a mere dot moving across the sky. BA14 is only visible with the aid of a powerful telescope.

Greg Hogan was so equipped. He imaged BA14 on Monday night from Kathleen, Georgia, using a Canon EOS 7D camera and a Celestron telescope.

"I did a 15-sec exposure for 85 shots and compiled them all together," Hogan told Space.com via email.

The resulting GIF — in which BA14 can be seen zipping diagonally from upper right to lower left near the center of the frame, shows "how fast it is moving across the sky in just a 20-minute window," Hogan added.

Comet 252P was discovered by MIT's Lincoln Near Earth Asteroid Research (LINEAR) survey in April 2000. BA14 was spotted just two months ago, on Jan. 22, by the University of Hawaii's PanSTARRS telescope.

The two comets' orbits are so similar that researchers think the objects may be related. It's possible that BA14 is a fragment that broke off of 252P during one of the latter body's previous trips around the sun, scientists have said.

Editor's Note: This article was updated on May 12 to reflect a revised Earth flyby distance of 3.3 million miles (5.2 million km) for Comet 252P/LINEAR.