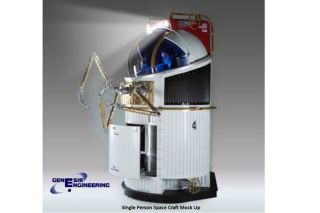 In the annals of spaceflight history, only a handful of Russian and American space travelers have experienced single-person orbital flight. But a recent three-month student competition has led to some creative interiors for a single-person spacecraft.

Genesis Engineering Solutions (GES) in Lanham, Maryland sponsored the engineering design contest as a way to integrate student creativity into the development of their Single-Person Spacecraft (SPS) concept. According to GES, the SPS includes an inner pressure vessel for shirtsleeve (normal clothing) operations and an outer unpressurized cylinder for micrometeoroid, orbital debris and impact protection.

Subsystems are packaged in the space between and in the overhead crown leaving the interior open for control, displays and other outfitting. An SPS astronaut will have rapid access to the work site to repair the aging International Space Station … or to an asteroid for sample collection, for example. [Related: NASA Funds Interstellar Flight System, 7 Other Wild Ideas]

They were encouraged to develop creative internal designs using only existing technologies. Furthermore, they had to provide controls for flying the SPS and operating robotic arms all while floating in zero-gravity.

The interior had to include displays and controls, warning lights and alarms, pilot restraints, creature comforts, and other accoutrements one might find in an automobile here on Earth.

"We didn't know what to expect and now we have an excess of great ideas to choose from," Robert Rashford, GES President & CEO, said in a press statement.

The winners of the SPS internal design competition were selected by a panel of experienced space experts. In addition to GES personnel, jurors included a former NASA Astronaut, NASA human factors engineers, and specialists in robotics.

Genesis Engineering Solutions has supported NASA projects since 1993, including the servicing missions to the Hubble Space Telescope and the James Webb Space Telescope.

Leonard David is author of "Mars: Our Future on the Red Planet," to be published by National Geographic this October. The book is a companion to the National Geographic Channel six-part series coming in November. A longtime writer for Space.com, David has been reporting on the space industry for more than five decades. Follow us @Spacedotcom, Facebook or Google+. Story published on Space.com.