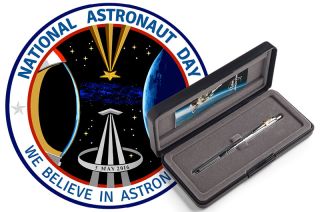 The first annual National Astronaut Day has arrived, and with it, a new line of space pens.

For this first year, the celebration is also being marked by a new partnership with Fisher Space Pen to offer a unique line of pressurized writing instruments featuring astronauts' engraved autographs. The sale of the space pens benefits [Freedom 7: Alan Shepard Becomes the First American in Space (Video)]

"Each astronaut took a unique path but all have a common vision to share their experiences to make the world, and beyond, better for us all," said Annie Balliro, president and CEO of Uniphi Good, the parent to Uniphi Space Agency. "In keeping with the true 'astronaut spirit,' it was mission critical to include a cornerstone of philanthropy for National Astronaut Day."

The unofficial holiday — Astronaut Day is not recognized by the government — coincides with the anniversary of the United States' first human spaceflight in 1961. Since Alan Shepard's Mercury launch 55 years ago Thursday (May 5), more than 330 American men and women have ventured beyond the Earth's atmosphere.

"It wasn't by accident that we chose to go ahead and have this on the anniversary of Al Shepard [becoming] the first American in space," said Mark Polansky, a former NASA space shuttle commander. "Similar to Yuri's Night — taking nothing away from the accomplishments of that program and the first human in space — we hope that this is a way too, to inspire a lot of kids about what happened and bring that into the classroom."

Yuri's Night, the "world space party" held annually on April 12, was founded and is continued to be run by a group of volunteers as an extension to Russia's Cosmonautics Day. Cosmonaut Yuri Gagarin preceded Shepard into space by two weeks, becoming the first human to orbit the Earth on April 12, 1961.

There are no parties on National Astronaut Day, but Uniphi Space Agency is offering other means to celebrate.

The public can enter to win space-related prizes, including a 30-minute Skype call with an astronaut, on the website NationalAstronautDay.com. The same site offers free astronaut cards to download.

"If you've ever wanted to know more about astronauts, you can download their individual cards that will give you some new perspective on these 'out of this world' individuals," said Michelle Lucas, Uniphi Space Agency's vice president for industry relations.

The website is also where the public can now order their own "Astronaut Signature" Fisher Space Pen, made by the same company that has provided pens to NASA for more than 40 years.

Each pen has an astronaut's engraved signature, as well as an astronaut- and charity-specific card inside its box. A portion of the proceeds from the sale of each pen will go to the charity selected by the astronaut.

"I chose The Mars Generation because it benefits a couple of things I care about," said Dottie Metcalf-Lindenburger, a former educator mission specialist and the first alumna of Space Camp to fly in space. "I care about informing young people — and especially young enthusiastic people about space — [and] being able to send kids to Space Camp."

"Being able to have my [pen's] proceeds go to The Mars Generation sends kids to Space Camp who might not ever go because of the financial strain that it would put on their families," she said.

Other organizations benefiting from the pen sales include the Air Force Museum Foundation, Astronaut Scholarship Foundation, Association of Space Explorers, and CASIS, the Center for the Advancement of Science in Space that manages the National Laboratory aboard the International Space Station.

Polansky, who fondly recalls going to sports games while growing up near New York City, chose Garden of Dreams, which works with the Madison Square Garden to positively impact the lives of children facing obstacles.

"It was just something that I thought was a slam dunk," he said. "I hope somehow we can help their mission of doing what they do to impact kids in a positive way."

Though it isn't on any federal calendar, National Astronaut Day is registered on National Day Calendar, a website that tracks annual celebrations. In addition to being Astronaut Day, May 5 is also National Cartoonists Day and Cinco de Mayo.

"This is about celebrating all of the astronauts who have gone to space before and made it possible for those of us to come," said Metcalf-Lindenburger.