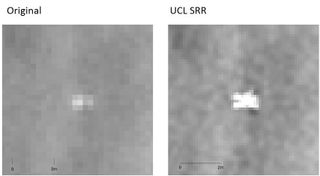 This resolution is five times greater than MRO or any other instrument orbiting Earth or Mars had been able to achieve, researchers said. Further use of this technique could help space agencies select safe landing sites for future Mars missions, search for pieces of other lost Red Planet hardware and perform a variety of other science work, they added. [Mars: The Spacecraft Graveyard]

"We now have the equivalent of drone-eye vision anywhere on the surface of Mars where there are enough clear repeat pictures," study co-author Jan-Peter Muller, of University College London's Mullard Space Science Laboratory, said in a statement. "It allows us to see objects in much sharper focus from orbit than ever before, and the picture quality is comparable to that obtained from landers."

"As more pictures are collected, we will see increasing evidence of the kind we have only seen from the three successful rover missions to date," Muller added, referring to NASA's Pathfinder, Spirit/Opportunity and Curiosity missions. "This will be a game changer and the start of a new era in planetary exploration."

The team applied the new technique to a variety of regions imaged by MRO, including the ancient, potentially habitable lake beds explored by Curiosity; the "Home Plate" region traversed by Spirit; and the site where Europe's first Mars lander, Beagle 2, touched down in December 2003. [The Search for Beagle 2 on Mars in Photos]

The United Kingdom-led Beagle 2 was part of the European Space Agency's Mars Express mission, which launched in June 2003 and arrived at the Red Planet six months later. The lander detached from its mother ship, the Mars Express orbiter, on Dec. 19, 2003, and was supposed to touch down on Christmas Day.

Beagle 2 never called its handlers from the Martian surface, and many experts assumed the craft had crashed. But last year, officials with the UK Space Agency announced that they had spotted the lander in MRO photos. These images appeared to show partially deployed solar arrays, suggesting that Beagle 2 had succeeded in touching down softly.

The newly released photos give the best looks yet at Beagle 2, which measures just 7 feet (2 meters) wide, scientists said.

The research team, led by Yu Tao of University College London, described the new "Super-Resolution Restoration" technique in a study that was published in the journal Planetary and Space Science in February. But team members have only recently begun using the method to zero in on specific locations on Mars.

The Mars Express orbiter continues to operate to this day.