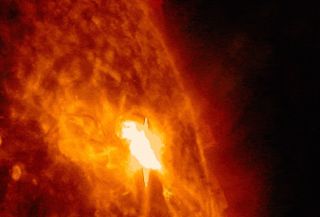 The flare erupted at 8:29 p.m. EDT Sunday (0029 GMT on Monday) from a giant sunspot known as active region (AR) 2529, which is currently big enough to fit nearly five Earths inside it. NASA's Solar Dynamics Observatory spacecraft captured amazing video of the solar flare as it happened.

The eruption caused moderate radio blackouts in some places, which have since cleared up, according to officials with the National Oceanic and Atmospheric Administration's Space Weather Prediction Center.

Sunspots are dark areas on the surface of the sun that are slightly cooler than surrounding regions. Sunspots serve as launchpads for solar flares and coronal mass ejections (CMEs), which blast gigantic clouds of solar plasma into space at millions of miles per hour. (Flares, by contrast, are bursts of extremely energetic radiation.)

AR 2529 has been an object of fascination recently for professional and amateur astronomers alike, but the viewing party is about to end.

"This sunspot has changed shape and size as it slowly made its way across the sun's face over the past week and [a] half. For much of that time, it was big enough to be visible from the ground without magnification," NASA officials wrote today (April 18) in a description of the new flare video. "This sunspot will rotate out of our view over the right side of the sun by April 20, 2016."