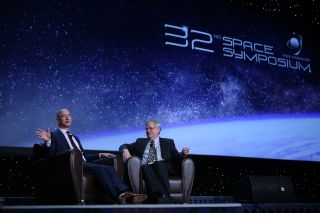 COLORADO SPRINGS, Colo. — Russia offered to fly Amazon founder and CEO Jeff Bezos beyond the moon for a mere $200 million, but the billionaire entrepreneur said no.

Of course, Bezos — who is also CEO of the spaceflight company Blue Origin — should be able to take a flight to suborbital space on Blue Origin's New Shepard vehicle in the near future.

Bezos mentioned the opportunity to fly on a Soyuz craft Tuesday (April 12) during a "fireside chat" with science journalist Alan Boyle at the 32nd National Space Symposium (NSS) in Colorado Springs, Colorado. NSS is one of the largest spaceflight industry meetings in the world. [Photos: Glimpses of Secretive Blue Origin's Private Spaceships]

Boyle asked Bezos whether he would go to space, and Bezos said he intended to fly on New Shepard, which Blue Origin representatives have said will start carrying humans by 2017. Bezos added that he established Blue Origin back in 2000 not out of a personal desire to go to space but rather because he wants to help make spaceflight cheaper, safer and more accessible to everyone.

This line of questioning led to the revelation that Roscosmos, the Russian federal space agency, approached Bezos to take a ride on Russia's Soyuz capsule, which is the only vehicle that is regularly carrying humans into space.

Roscosmos officials inquired about Bezos' desire to ride a Soyuz craft to the International Space Station (ISS), the capsule's usual destination. The Soyuz has flown a handful of wealthy space tourists to and from the ISS before, at about $20 million per seat.

Roscosmos also offered Bezos the chance to do a flyby of the moon — a capability that the Soyuz was built for but that has not been tested. The lunar mission would cost Bezos about $200 million, he said. The high price tag was an issue, as was the fact that the Soyuz hasn't yet been tested on a lunar flyby. Roscosmos responded by saying it would test the vehicle for him, for an additional $400 million. Bezos turned the Russian officials down.

The talk between Bezos and Boyle covered many aspects of Blue Origin's current goals, including getting its BE-4 engine into operation in the company's orbital vehicle, as well as in rockets built by United Launch Alliance.

But Bezos' dreams go far beyond those goals. He reiterated his long-term vision of having "millions of people living and working in space," but went farther to say that Earth should eventually conduct most of its manufacturing in space and use the planet's surface primarily for habitation. [3D Printing in Space: 21st Century Space Manufacturing and Technology]

Bezos said he thinks the massive growth of internet-based companies over the past two decades was possible largely because those companies could build upon pre-existing infrastructure. For example, phone companies had already built the international infrastructure to allow people to connect to the internet, even though that was not part of the original purpose of phone lines. Moreover, the existence of remote payment systems and the post office allowed Amazon.com to sell products over the internet and ship them all over the world, Bezos said.

But a similar infrastructure is missing for the spaceflight industry, he noted.

"If you want to see a kind of dynamic golden age where thousands of entrepreneurs can be doing amazing things in space … the reason we haven't seen it is, the big, heavy-lifting pieces are not yet in place," Bezos said. "And there may be multiple things that have to happen before you can see that kind of giant leap, but I don't think so. I really think it's just one big piece: We need much lower-cost access to space."

Blue Origin may help change that, Bezos said. One of the primary pillars that set Blue Origin apart from most (though not all) other spaceflight companies is its emphasis on reusable rockets, which would "make access to space much lower-cost, so entrepreneurs can do exciting things in space."

On April 2, Blue Origin successfully launched and landed one of its New Shepard suborbital rockets. After separating from the company's space capsule (which is built to carry humans on suborbital flights), the rocket used its thrusters to land vertically on the ground. This same rocket had launched and landed twice before, so Blue Origin is making big strides in its quest for reusability.

Blue Origin has said that its suborbital vehicle will provide commercial trips to space for civilians. It will also serve as a place to do scientific experiments in microgravity, or test technologies that will eventually go into orbit.

Blue Origin is not the only company pursuing reusable rocket boosters: The private spaceflight company SpaceX recently made its second reusable rocket landing — this time, on a robotic "drone ship" off the coast of Florida. (SpaceX's first such landing occurred on land, at Florida's Cape Canaveral Air Force Station.)

Whereas New Shepard touched down after missions to suborbital space, SpaceX's rocket landings occurred during launches that sent payloads to orbit. [See photos of SpaceX's recent rocket landing at sea]

Blue Origin plans to get into the orbital spaceflight game as well. In the same way that Amazon.com began as an online bookseller and then expanded into selling a wide array of items, as well as other ventures, Bezos said "suborbital space tourism might be the 'books' equivalent for Blue Origin."

Blue Origin is building an orbital vehicle that it has nicknamed "Very Big Brother," which is also being designed to be reusable. Bezos said the vertical landing approach that the company is using with New Shepard can be scaled up to bigger rockets.

"In terms of that landing segment, which is the most challenging segment of this type of mission, that part just gets easier with scale," Bezos said. "In fact, in general, rockets want to be big. The bigger, the better, as far as vertical landing is concerned."

Very Big Brother will be powered by the company's BE-4 engine, which Blue Origin has a contract to sell to United Launch Alliance (ULA), which currently builds its Atlas V rockets using refurbished Russian rocket engines.

On this point, Bezos noted that ULA launches many national-security payloads and that the BE-4 engine will therefore help keep the United States strong and safe.

"Me and all of us at Blue Origin find the fact that we will get to help with the national-security missions incredibly motivating," he said.

Finally, Boyle asked Bezos to talk more about the distant future of humans in space. Bezos said he believes in increasing Earth's energy consumption because it allows people to live better lives. But he also emphasized his belief that humanity should expand into space in order to protect Earth from that growing energy appetite. In fact, Bezos said he thinks a majority of manufacturing facilities could eventually be moved into space, leaving the surface of the planet free for habitation.

"I think we need to explore and utilize space in order to save the Earth," Bezos said. "So we are going to go into space, and we need to do so in order to continue to grow our civilization and to keep this jewel of a planet the way it is. And I think we will do that."