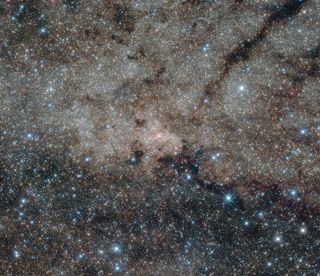 This infrared image from the NASA/ESA Hubble Space Telescope shows the centre of the Milky Way, 27 000 light-years away from Earth. Using the infrared capabilities of Hubble, astronomers were able to peer through the dust which normally obscures the view of this interesting region. At the centre of this nuclear star cluster — and also in the centre of this image — the Milky Way’s supermassive black hole is located.
(Image: © NASA, ESA, and the Hubble Heritage Team (STScI/AURA) Acknowledgment: NASA, ESA, T. Do and A. Ghez (UCLA), and V. Bajaj (STScI))

A jaw-dropping new video takes viewers on an epic journey through the center of the Milky Way, where hundreds of thousands of stars jostle shoulder-to-shoulder near the galaxy's supermassive black hole.

The new Milky Way video, which we set to the cosmic tune "Stars" by Grace Potter, shows more than 500,000 stars in the densest, most massive cluster in the galaxy, which lies near the Milky Way's core. These stars were imaged by the iconic Hubble Space Telescope, a joint project involving NASA and the European Space Agency (ESA).

"This region is so tightly packed that it is equivalent to having 1 million stars crammed into the volume of space between us and Alpha Centauri, located 4.3 light-years away," ESA officials said in a statement.

"At the very hub of our galaxy, this dense, nuclear star-cluster surrounds the Milky Way’s central supermassive black hole, known as Sagittarius A*, which alone is about 4 million times the mass of the sun," the officials added. (That black hole is not visible in the new video.)

The Hubble video shows many stars that are not visible with the naked eye, due to the amount of dust in the galaxy's center, but that instead shine in infrared light.

A few stars in the video (shown in blue) are actually in the foreground and are not close to the Milky Way's center, which lies about 27,000 light-years from Earth. Other stars (shown in red) are either behind the dust or embedded inside of it. Even with Hubble's infrared vision, there are roughly 10 million stars in the cluster that the telescope cannot see, ESA officials said.

"Some extremely dense clouds of gas and dust are seen in silhouette, appearing dark against the bright background stars," ESA officials wrote. "These clouds are so thick that even Hubble's infrared capability cannot penetrate them."

Hubble launched into orbit in April 1990, and it has been returning stunningly detailed images of the cosmos since spacewalking astronauts repaired a flaw in the telescope's primary mirror in 1993. The observatory's longevity has allowed astronomers to track the movements of some of the stars highlighted in the new video over several years, providing information on mass, structure and how the region was formed, ESA officials said.