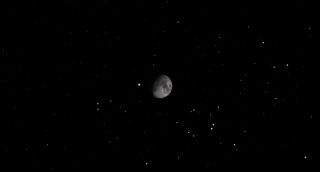 A stellar eclipse will be visible from nearly everywhere in the United States and much of southern Canada on April 10. The crescent moon will "run over" the star Aldebaran in the constellation Taurus.
(Image: © Starry Night Software)

A stellar eclipse will be visible from nearly everywhere in the United States and much of southern Canada this Sunday (April 10). Even skywatchers in Hawaii will be able to see the eclipse, although it will not be visible from Alaska.

The waxing crescent moon, 15 percent illuminated by the sun, will pass in front of the star that marks the angry orange eye of the constellation Taurus, also known as the Bull.

That star is Aldebaran, the 13th brightest star in the sky and certainly one of the more colorful ones. This eclipse is known to astronomers as a lunar occultation. As the moon orbits the Earth, it appears, from our perspective, to move slowly toward the east relative to the stars, at roughly its own diameter per hour. A waxing moon always leads with its dark edge as it moves along its orbit against the starry background. [The Best Night Sky of April 2016 (Sky Maps)]

However, there is a catch: Across most of its viewing range, the moon will be crossing in front of the star during the daytime.

Some skywatchers may think that this will preclude them from seeing the occultation, but that's not necessarily so. While you certainly will not be able to see it with your unaided eye, if you're looking just prior to when it vanishes behind the moon, a good pair of binoculars or a small telescope should allow you to pick out Aldebaran against the blue daytime sky.

Of course, your ability to see it will be strongly dependent on your local weather. If, for instance, the sky is hazy or if there are thin or high clouds passing across your line of sight as Aldebaran is about to duck out of sight behind the moon, you probably will not see it. In fact, your first hurdle would be to locate the moon itself.  It will be located about 50 degrees to the east (left) of the sun. Your clenched fist held out at arm's length measures roughly 10 degrees, so look for the moon approximately "five fists" to the left of the sun.

If the sky in your area is deep blue — which usually happens after the passage of a cold front or storm system accompanied by rain to "cleanse" the sky of any clouds or haze — you have a better chance of observing this skywatching event.

And if you do glimpse Aldebaran in your binoculars or telescope, keep in mind that it will disappear behind the moon's unilluminated portion first. In deep twilight or darkness, you would be able to see the dark part of the moon approach the star by virtue of earthshine — that dark portion would be dimly lit with a bluish-gray hue. But in the daytime, it's completely invisible, so the star will suddenly seem to "click off" as if somebody had flipped a switch.

Table 1 provides a listing for a dozen selected cities in the United States and Canada and the times when Aldebaran will disappear, and later reappear, from behind the moon. All times are in local daylight time, except for Honolulu. (Hawaii does not observe daylight saving time.)

If you live near or along the Atlantic Seaboard, the occultation will take place close to the time of sunset.  In fact, from the northeastern U.S., the time that Aldebaran is due to emerge back into view (along the moon's bright edge) will take place after sunset in a twilight sky,making it a bit easier to see. And from the Canadian Maritime Provinces, both the disappearance and reappearance will occur after sunset.

Table 2 provides listings for six selected cities in the northeastern United States and eastern Canada, and the times when Aldebaran will disappear and later reappear (after sunset) from behind the moon. The local time of sunset is included. All times are in local daylight time.

For those who are a bit more technically inclined, here is a link to the International Occultation Timers Association (IOTA) web page, which provides a map showing the region of visibility of the occultation, along with a comprehensive listing of times for nearly 600 locations in the United States, Canada, Mexico and the Caribbean. All times are in Universal Time (UT).

Of course, once darkness falls across all of North America on Sunday evening, skywatchers will readily see Aldebaran plainly shining to the lower right of the moon — the moon will have "run over" the star a short time earlier.

Editor's note: If you capture an amazing view of the moon and bright star Aldebaran, or any other night sky view, that you'd like to share with Space.com and our news partners for a story or gallery, send images and comments in to managing editor Tariq Malik at spacephotos@space.com.