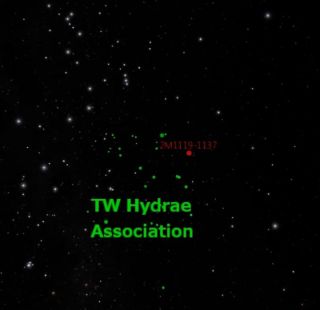 The newfound rogue planet 2MASS J1119–1137 belongs in the youngest group of stars in the solar neighborhood, known as the TW Hydrae association, which contains about two dozen 10 million-year-old stars, all moving together through space.
(Image: © David Rodriguez, with contributions from Jacqueline Faherty, Jonathan Gagne and Stanimir Metchev)

A huge, newly discovered alien planet that zooms through space without a parent star is one of the closest such "rogue" worlds to Earth yet seen, astronomers say.

The exoplanet, known as 2MASS J1119–1137, is four to eight times more massive than Jupiter and lies about 95 light-years from Earth at the moment, a new study reports.

The newfound world is only slightly less bright than the giant rogue planet PSO J318.5−22, which was first spotted in 2013 and is located about 80 light-years from Earth's solar system, researchers said.

Kendra Kellogg, a graduate student at Western University in Ontario, Canada, and her colleagues detected, confirmed and characterized 2MASS J1119–1137 using NASA's Wide-field Infrared Survey Explorer satellite and the Gemini South and Baade telescopes, both of which are in Chile.

Such rogue worlds may have formed around host stars, and then been booted out into space by gravitational interactions with neighboring planets in their natal systems, researchers say. Whatever their origins, they are ripe targets for further study; in our Milky Way galaxy, rogue planets actually may outnumber "normal" worlds bound to parent stars.

"Discovering free-floating planet analogs like 2MASS J1119–1137 and PSO J318.5−22 offers a great opportunity to study the nature of giant planets outside the solar system," Kellogg said in statement.

Rogues are "much easier to scrutinize than planets orbiting around other stars," she added. "Objects like 2MASS J1119–1137 are drifting in space all alone, and our observations are not overwhelmed by the brightness of a host star next door."

The new study will be published in The Astrophysical Journal Letters.