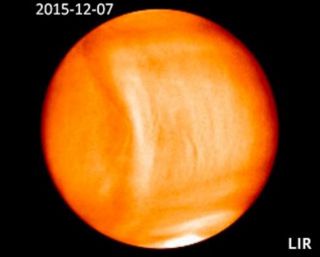 This test image of Venus was captured in December 2015 by the Longwave IR camera aboard Japan's Akatsuki spacecraft.
(Image: © JAXA)

A Japanese spacecraft's long-awaited Venus campaign is finally about to begin.

Japan's Akatsuki probe was originally supposed to arrive at Venus in December 2010, but an engine failure caused the spacecraft to miss its target and zoom off into orbit around the sun. But this past December, Akatsuki's handlers managed to guide the craft back to Venus, and now the probe is just about ready to start science operations.

"Akatsuki has been performing test observations by turning on its onboard observation instruments one by one," Japan Aerospace Exploration Agency (JAXA) officials wrote in an update on Friday (April 1).  [Japan at Venus: See the photos from Akatsuki]

"The instruments are starting up normally, and we have already conducted successful observations that are equivalent to a 'minimum success,'" they added. "Thus we will move to regular operations in mid-April."

The $300 million Akatsuki spacecraft, whose name means "dawn" in Japanese, was designed to study Venus' clouds, weather and atmosphere up close using six different instruments. The probe's observations should help researchers better understand how Venus, which may have been quite Earth-like billions of years ago, became so hot and seemingly inhospitable to life, JAXA officials have said.

The original plan called for Akatsuki to orbit Venus once every 30 hours, at a maximum distance (apoapsis) of about 50,000 miles (80,000 kilometers). But the second-chance run at Venus put the probe in a 13-day orbit that took Akatsuki as far as 273,000 miles (440,000 km) from the planet's surface, JAXA officials said.

Over the past few months, Akatsuki has been working to get to a less elliptical orbit; JAXA has stated that it wants the probe to be in a nine-day orbit with an apoapsis of about 193,000 miles (310,000 km) by the time regular operations begin.

Akatsuki should still be able to accomplish most of its original science goals from such an orbit, JAXA officials have said. The vessel launched in May 2010 along with JAXA's Ikaros probe, which became the first spacecraft ever to deploy and use a solar sail in interplanetary space.