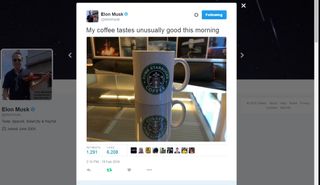 A tweet sent out by Elon Musk in February set off some social media activity that could indicate a collaboration between Musk and comedian Nathan Fielder.
(Image: © Twitter/Elon Musk)

The private spaceflight company SpaceX and its CEO Elon Musk may (or may not) be working on something with Nathan Fielder, host of the Comedy Central show "Nathan for You."

The potential collaboration has only been hinted at on social media, as the comedy news website Splitsider reported.

"Nathan for You" is an absurd take on the reality show genre in which a straight-talking host tries to turn around a failing business. (Examples are "Kitchen Nightmares," "Undercover Boss," and "Bar Rescue.") In "Nathan for You," Fielder takes up that mantle, but his ideas for helping these (real) businesses are completely absurd. In past episodes, Fielder convinced people to work for a moving company for free by telling them it was a new exercise plan; advised a pet shop owner to advertise his store on a custom-made gravestone in a pet cemetery; and made a haunted house significantly scarier by telling people who visit that they had contracted an airborne disease. [SpaceX's Manned Dragon Space Capsule Explained (Infographic)]

The show was recently greenlit for a fourth season, so it seems likely that Fielder is currently working on the next season's schemes. Now, posts on social media seem to suggest he's also working on something with Elon Musk and SpaceX.

On Feb. 18, Musk tweeted a photo of a coffee mug with what appears to be the Starbucks logo, and the caption: "My coffee tastes unusually good this morning."

But the mug actually says "Dumb Starbucks," which is a reference to one of Fielder's most famous stunts, in which he opened a coffee shop that looked exactly like a Starbucks (even using the Starbucks logo), but added the word "dumb" to every written label in the store. The shop sold items such as the "Dumb Frappuccino" and "Dumb Latte," which came in sizes "dumb Tall," "dumb Grande," and "dumb Venti." Fielder then claimed that the store was protected under parody law. The store opened on Feb. 7, 2014, and attracted national media attention.

When Musk tweeted that photo, there was no indication that he and Fielder actually knew each other. Fielder tweeted back at Musk, "Shoot me into space please." Musk then tweeted at Fielder, "Don't you already have a spaceship?" and a picture that referenced another episode of "Nathan for You" that featured a space shuttle-shaped bed.

The Twitter exchange petered out after that, but then on March 9, Fielder posted a photo on Instagram that looks like a SpaceX parking space with his name on it. The caption reads: "bye."

Could Fielder be hinting that he's saying "bye" to the Earth, and is headed on a journey into space? Well, considering that SpaceX has never flown human passengers, and has no plans to offer civilian trips to space, that seems highly unlikely.

But it's not outside the realm of possibility that Fielder is collaborating in some way with Musk and/or SpaceX for the fourth season of his show. Musk has put himself in the public eye as the face of SpaceX, and isn't afraid to drum up a little bit of media buzz for the company. There is no date set for the show's fourth-season debut.