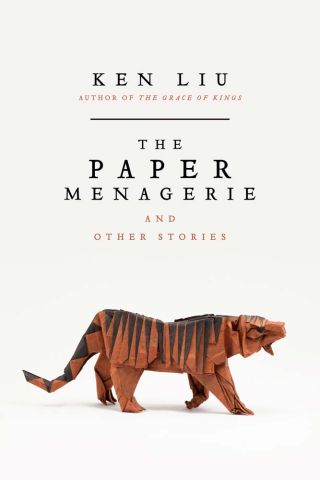 Ken Liu is an author and translator of speculative fiction, as well as a lawyer and programmer. A winner of the Nebula, the Hugo and the World Fantasy Award, he has been published in The Magazine of Fantasy & Science Fiction, Asimov's, Analog, Clarkesworld, Lightspeed and Strange Horizons, among others. Ken's debut novel is "The Grace of Kings" (Saga, 2015), the first in a silkpunk epic fantasy series. Liu contributed this article to Space.com's Expert Voices: Op-Ed & Insights.

Science fiction author Ken Liu has won numerous awards, from the Hugo to the Nebula, and he recently published a collection of short works, "The Paper Menagerie and Other Stories" (Saga, 2016).

From that collection, Space.com is hosting the story below, "The Bookmaking Habits of Select Species."

Excerpt copyright 2016 by Ken Liu, reprinted with permission from Saga Press, an imprint of Simon & Schuster

There is no definitive census of all the intelligent species in the universe. Not only are there perennial arguments about what qualifies as intelligence, but each moment and everywhere, civilizations rise and fall, much as the stars are born and die.

Yet every species has its unique way of passing on its wisdom through the ages, its way of making thoughts visible, tangible, frozen for a moment like a bulwark against the irresistible tide of time.

It is said by some that writing is just visible speech. But we know such views are parochial.

A musical people, the Allatians write by scratching their thin, hard proboscis across an impressionable surface, such as a metal tablet covered by a thin layer of wax or hardened clay. (Wealthy Allatians sometimes wear a nib made of precious metals on the tip of the nose.) The writer speaks his thoughts as he writes, causing the proboscis to vibrate up and down as it etches a groove in the surface.

To read a book inscribed this way, an Allatian places his nose into the groove and drags it through. The delicate proboscis vibrates in sympathy with the waveform of the groove, and a hollow chamber in the Allatian skull magnifies the sound. In this manner, the voice of the writer is re-created.

The Allatians believe that they have a writing system superior to all others. Unlike books written in alphabets, syllabaries, or logograms, an Allatian book captures not only words, but also the writer's tone, voice, inflection, emphasis, intonation, rhythm. It is simultaneously a score and recording. A speech sounds like a speech, a lament a lament, and a story recreates perfectly the teller's breathless excitement. For the Allatians, reading is literally hearing the voice of the past.

But there is a cost to the beauty of the Allatian book. Because the act of reading requires physical contact with the soft, malleable surface, each time a text is read, it is also damaged and some aspects of the original irretrievably lost. Copies made of more durable materials inevitably fail to capture all the subtleties of the writer's voice, and are thus shunned.

In order to preserve their literary heritage, the Allatians have to lock away their most precious manuscripts in forbidding libraries where few are granted access. Ironically, the most important and beautiful works of Allatian writers are rarely read, but are known only through interpretations made by scribes who attempt to reconstruct the original in new books after hearing the source read at special ceremonies.

For the most influential works, hundreds, thousands of interpretations exist in circulation, and they, in turn, are interpreted and proliferate through new copies. The Allatian scholars spend much of their time debating the relative authority of competing versions and inferring, based on the multiplicity of imperfect copies, the imagined voice of their antecedent, an ideal book uncorrupted by readers.

The Quatzoli do not believe that thinking and writing are different things at all.

They are a race of mechanical beings. It is not known if they began as mechanical creations of another (older) species, if they are shells hosting the souls of a once-organic race, or if they evolved on their own from inert matter.

A Quatzoli's body is made out of copper and shaped like an hourglass. Their planet, tracing out a complicated orbit between three stars, is subjected to immense tidal forces that churn and melt its metal core, radiating heat to the surface in the form of steamy geysers and lakes of lava. A Quatzoli ingests water into its bottom chamber a few times a day, where it slowly boils and turns into steam as the Quatzoli periodically dips itself into the bubbling lava lakes. The steam passes through a regulating valve — the narrow part of the hourglass — into the upper chamber, where it powers the various gears and levers that animate the mechanical creature.

At the end of the work cycle, the steam cools and condenses against the inner surface of the upper chamber. The droplets of water flow along grooves etched into the copper until they are collected into a steady stream, and this stream then passes through a porous stone rich in carbonate minerals before being disposed of outside the body.

This stone is the seat of the Quatzoli mind. The stone organ is filled with thousands, millions of intricate channels, forming a maze that divides the water into countless tiny, parallel flows that drip, trickle, wind around each other to represent simple values which, together, coalesce into streams of consciousness and emerge as currents of thought.

Over time, the pattern of water flowing through the stone changes. Older channels are worn down and disappear or become blocked and closed off — and so some memories are forgotten. New channels are created, connecting previously separated flows — an epiphany — and the departing water deposits new mineral growths at the far, youngest end of the stone, where the tentative, fragile miniature stalactites are the newest, freshest thoughts.

When a Quatzoli parent creates a child in the forge, its final act is to gift the child with a sliver of its own stone mind, a package of received wisdom and ready thoughts that allow the child to begin its life. As the child accumulates experiences, its stone brain grows around that core, becoming ever more intricate and elaborate, until it can, in turn, divide its mind for the use of its children.

And so the Quatzoli are themselves books. Each carries within its stone brain a written record of the accumulated wisdom of all its ancestors: the most durable thoughts that have survived millions of years of erosion. Each mind grows from a seed inherited through the millennia, and every thought leaves a mark that can be read and seen.

Some of the more violent races of the universe, such as the Hesperoe, once delighted in extracting and collecting the stone brains of the Quatzoli. Still displayed in their museums and libraries, the stones — often labeled simply "ancient books" — no longer mean much to most visitors.

Because they could separate thought from writing, the conquering races were able to leave a record that is free of blemishes and thoughts that would have made their descendants shudder.

But the stone brains remain in their glass cases, waiting for water to flow through the dry channels so that once again they can be read and live.

For more from Liu, read his essay on writing science fiction, "Writing Sci-Fi? First Understand How Elephants Aren't Dragonflies," his exploration of silkpunk in "'Silkpunk': Redefining Technology for 'The Grace of Kings'" and Live Science's excerpt from that novel.