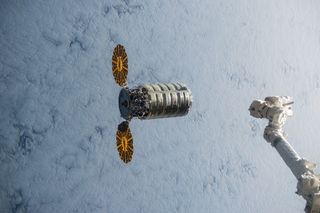 The previous robotic Cygnus cargo ship is seen leaving the International Space Station on Feb. 19, 2016 to burn up in Earth’s atmosphere.
(Image: © NASA)

A robotic cargo vessel is chasing down the International Space Station (ISS) ahead of a planned Saturday meetup, and you can spot the duo from the ground.

Weather permitting, skywatchers can get a bead on the ISS and Orbital ATK's uncrewed Cygnus freighter using Space.com's satellite tracker, which is powered by N2YO. The tracker figures out where you are based on your computer's IP address and lets you know about upcoming satellite flyovers.

The Cygnus launched on Tuesday evening (March 22) from Florida's Cape Canaveral Air Force Station, loaded with nearly 4 tons of supplies, hardware and scientific experiments for ISS crewmembers. The cargo ship is scheduled to arrive at the orbiting lab on Saturday morning (March 26). [See photos of the Cygnus' dazzling nighttime launch]

Until then, however, you can see the ISS and Cygnus as separate entities in the sky. What will they look like from the ground?

Well, ISS is big — about the length of a football field — and bristling with reflective solar arrays, so it's not tough to spot if conditions are good. On favorable passes, the ISS can be as bright as Venus, according to Space.com skywatching columnist Joe Rao.

Cygnus is much smaller and will therefore appear far dimmer. If seen from a distance of 620 miles (1,000 km), for example, Cygnus will be about as bright as a third-magnitude star — the rough equivalent of Megrez, the star that joins the Big Dipper's handle to its bowl, Rao wrote.

Of course, both the ISS and Cygnus will be moving much faster across the sky than either Venus or any star. The two spacecraft are currently circling Earth once every 90 minutes or so, along roughly the same path.

The best times to spot the ISS, Cygnus and other satellites are when the spacecraft are in sunlight but viewers on the ground are in darkness. So try to catch a pass that occurs just after dusk or just before dawn, if possible.

Cygnus is flying to the station as part of a resupply deal that Virginia-based Orbital ATK holds with NASA. California-based SpaceX signed a similar contract and flies robotic cargo missions to the ISS using the company's Dragon capsule and Falcon 9 rocket.

Editor's note: If you capture an amazing photo of a night-sky sight and you'd like to share it with Space.com and our news partners for a story or gallery, send images and comments in to Managing Editor Tariq Malik at: spacephotos@space.com.