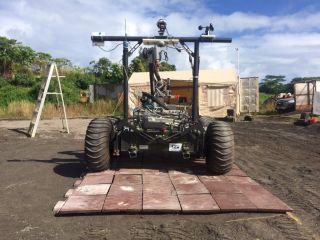 A robot has built a prototype launch-and-landing pad in Hawaii, potentially helping pave the way for automated construction projects on the moon and Mars.

The robotic rover, named Helelani, assembled the pad on Hawaii's Big Island late last year, putting together 100 pavers made of locally available material in an effort to prove out technology that could do similar work in space.

"The construction project is really unique. Instead of concrete for the landing pad, we're using lunar and Mars material, which is exactly like the material we have here on the Big Island — basalt," Rob Kelso, executive director of the Pacific International Space Center for Exploration (PISCES) in Hawaii, told Hawaiian news outlet Big Island Now. PISCES partnered with NASA on the project, which is part of a larger program called Additive Construction with Mobile Emplacement, or ACME for short. [The Boldest Mars Missions in History]

"And secondly, instead of a human workforce building construction for the landing pad, we're using robotics," Kelso added.

The overall goal of the ACME program is to enable the design and construction of infrastructure on the moon and Mars using local materials. Doing so would be much cheaper and more efficient than hauling everything from Earth, advocates say, since it currently costs about $10,000 to launch every kilogram (2.2 lbs.) of payload from our planet's surface to orbit.

Humanity has taken some steps toward making off-Earth manufacturing a reality. In 2014, NASA launched a 3D printer, which was built by the California company Made In Space, to the International Space Station. The machine soon built a number of items, showing that the technology can work in microgravity conditions. Made In Space aims to launch a larger, commercially oriented 3D printer to the station soon.

The ACME program fits into NASA's long-term vision, which sees robots and 3D printers smoothing humanity's way to Mars and other distant destinations — and helping prepare the off-Earth ground for astronauts' arrival.

One way robots could do this is by building dual-purpose vertical takeoff, vertical landing pads. Such VTVL pads will be important for future missions, advocates say; they will eliminate or mitigate the dust storms that would otherwise result (and possibly damage space equipment and/or neighboring structures) during launch and landing operations.

Furthermore, moon dust is incredibly fine, and it sticks to everything. So keeping it out of astronauts' way, and off their equipment, will be a priority for the planners of future lunar efforts.

Hence Helelani, and its Hawaiian VTVL pad. The rover first worked to clear and grade a 100-square-foot (9.3 square meters) area. Using its robotic arm, the rover then laid out 100 interlocking basalt pavers, which were joined like puzzle pieces to help reinforce the pad.

Helelani was controlled remotely from NASA's Kennedy Space Center in Florida. Time delays were added to the communications to help simulate a lunar or Mars mission, project team members said. The next step will be to test the pad's durability by blasting it with a simulated rocket engine plume, they added.

NASA engineer and project team member Rob Mueller will provide an update about ACME, Helelani and the VTVL pad next week, at the 47th Lunar and Planetary Science Conference in The Woodlands, Texas.