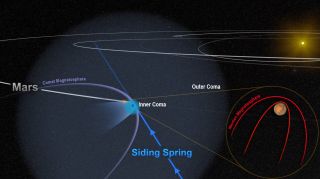 The magnetic fields of Mars and Comet Siding Springs merged during the comet's October 2014 flyby, with Mars coming off the worse for it. A stream of invisible charged particles from the comet's coma flooded the planet, with many of the particles reaching or nearly reaching the surface.
(Image: © NASA/Goddard Space Flight Center)

A close shave with a comet in October 2014 did a number on Mars' magnetic field, a new study reveals.

On Oct. 19, 2014, Comet Siding Spring zoomed within 87,000 miles (140,000 kilometers) of the Martian surface. During this highly anticipated flyby, the comet's magnetic field interacted with and overwhelmed the Red Planet's own weak magnetic field, sending a portion of Mars' outer atmosphere into space, scientists said.

"We think the encounter blew away part of Mars' upper atmosphere, much like a strong solar storm would," Espley said.

Earth's magnetic field forms a strongly protective outer shell around this planet, deflecting into space most of the solar material flowing toward Earth.

But the situation is quite different on Mars. The Martian magnetic field isn't generated within the planet's core, but rather in its atmosphere. The upper layers of Mars' atmosphere consist of plasma that, when interacting with the charged particles in the solar wind, creates a weak magnetic field that protects the planet in fits and bursts.

Comet Siding Springalso has a magnetic field, which is generated by solar-wind interactions with plasma produced in the coma, the cloud of material flowing from the comet's nucleus. Siding Spring's nucleus itself is small, only about 0.3 miles (0.5 km) across, but the coma stretches out more than 600,000 miles (1 million km) in all directions.

Siding Spring made its Mars flyby only a few weeks after MAVEN(whose name is short for Mars Atmosphere and Volatile Evolution) arrived in orbit around the Red Planet. While most of the orbiter's instruments were turned off as a safety precaution, a few, including MAVEN's magnetometer, remained on to take a closer look at how the comet and the planet interacted.

As Comet Siding Springpassed by Mars, the coma washed over the planet for several hours, with the dense material of the inner coma nearly reaching the surface of the Red Planet. The two magnetic fields briefly merged, and the stronger field created by Siding Springs overwhelmed the weak, planetary shield.

"The main action took place during the comet's closest approach," Espley said. "But the planet's magnetosphere began to feel some effects as soon as it entered the outer edge of the comet's coma."

The first changes were small, with some portions of the Martian magnetic field changing the direction in which they pointed. As the comet grew closer, the effect grew stronger, and by the time of closest approach, the Martian magnetic field was in complete chaos. Nor did the field calm down immediately after Siding Springs had moved on; MAVEN measured disruptions in the field hours after the comet had passed, scientists said.

Espley and his colleagues said the effects of the comet's interaction resembled a strong but short-lived solar storm. The fleeting engagement may have briefly increased the amount of gas escaping from the already-thin Martian atmosphere.

MAVEN launched in 2013, on a mission to study the Martian upper atmosphere and how it interacts with the sun and solar wind. The spacecraft arrived at Mars in September 2014 and began to take measurements as part of the mission's goal to better understand how the planet lost its atmosphere, along with its once-plentiful liquid surface water, over time.

"With MAVEN, we're trying to understand how the sun and solar wind interact with Mars," MAVEN principal investigator Bruce Jakosky, of the University of Colorado's Laboratory for Atmospheric and Space Physics in Boulder, said in a different statement. "By looking at how the magnetospheres of the comet and Mars interact with each other, we're getting a better understanding of the detailed processes that control each one."