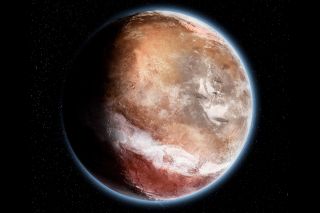 An artist's impression of what Mars might have looked like 4 billion years ago, according to a new study.
(Image: © Didier Florentz)

The farthest galaxy, a mistaken announcement, and an American space hero comes home — it's Space.com's top stories of the week.

A galaxy named GN-z11 turns out to be the farthest galaxy ever measured, thanks to Hubble Space Telescope. [Full story: Farthest Galaxy Yet Smashes Cosmic Distance Record]

Track satellites from the comfort of home

Space.com has partnered with N2YO.com to provide an online satellite tracker you can use to view overhead visitors in the night sky. [Full story: Introducing Space.com's New Satellite Tracker from N2YO]

Portrait of Mars as a young planet

Not so fast, my friend

Researchers who announced the discovery of the source of a Fast Radio Burst (FRB) may have been mistaken. [Full story: Not So Fast: Discovery of Radio Burst Source May Be Flawed]

You're in the transit zone

Aliens hunting for habitable planets could use the same method we use to search for them. [Full story: Hunt for Intelligent Aliens Should Focus on 'Transit Zone']

The US Air Force could borrow ideas from the Synergetic Air-Breathing Rocket Engine (SABRE) developed by an British company. [Full story: US Military Set to Unveil Concepts Based on Skylon Space Plane Tech]

Eyes on the Moon Prize

A 100-foot-wide (30 meters) asteroid will zip by Earth on March 8, but details are hazy. [Full story: Uncertainty Surrounds Asteroid Near-Earth Flyby Next Week]

The American hero who spent almost a year in space coincidentally arrived back on Earth on the rare date of Feb. 29. [Full story: Space Station Command Change Is One Giant Leap (Day) for Space History]

How many times must a man circle the earth?