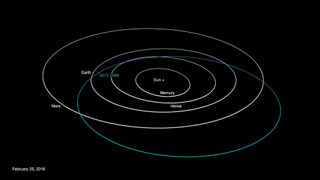 This graphic depicts the orbit of asteroid 2013 TX68, which will fly by Earth on March 8, 2016. The asteroid poses no threat to Earth during this flyby or in the foreseeable future.
(Image: © NASA/JPL-Caltech)

A decent-size asteroid will zoom past Earth next week, but astronomers aren't sure exactly when the flyby will happen, or just how close the space rock is going to get.

The latest observations suggest that the 100-foot-wide (30 meters) near-Earth asteroid 2013 TX68 will come within about 3 million miles (5 million kilometers) of Earth's surface on March 8, NASA researchers said. But it's also possible that the space rock will get much, much closer — 15,000 miles (24,000 km) or so, which is inside the planet's ring of geostationary satellites.

Despite all of the uncertainty — researchers originally thought the flyby was going to happen on Saturday (March 5) — there is nothing to fear from 2013 TX68, scientists said. The space rock has no chance of hitting Earth on this pass, or on any future close approaches over the next century.

"There is no concern whatsoever regarding this asteroid — unless you were interested in seeing it with a telescope," Paul Chodas, manager of NASA's Center for Near-Earth Object Studies at the Jet Propulsion Laboratory in Pasadena, California, said in a statement.

"Prospects for observing this asteroid, which were not very good to begin with, are now even worse because the asteroid is likely to be farther away, and therefore dimmer than previously believed," Chodas added.

2013 TX68 was discovered in October 2013 by astronomers working with the Catalina Sky Survey in Arizona. The asteroid orbits the sun every 780 days or so; two years ago, 2013 TX68 flew by Earth at a distance of 1.3 million miles (2 million km).

However, observations of the asteroid remain limited, which explains the uncertainty associated with its orbit.

2013 TX68 isn't particularly big as far as space rocks go, and it wouldn't do serious, widespread damage if it did hit Earth. (Most researchers think asteroids must be at least 0.6 miles, or 1 km, wide to cause problems for humanity on a global scale.)

Scientists think the Chelyabinsk airburst was caused by a near-Earth object about 65 feet (20 m) wide.