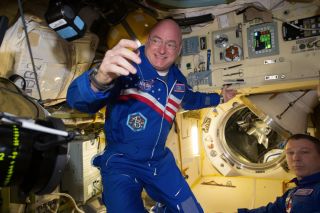 Astronaut Scott Kelly is back from his record-breaking 340 days in space, and you can hear about his perspective and the science behind the mission starting today (March 4) at 1 p.m. EST (1800 GMT).

The NASA press conference — which you can watch live here on Space.com, courtesy of NASA TV — will start at 1 p.m. with a briefing on the science of the mission. Next, at 2 p.m. EST (1900 GMT), Kelly will take questions and share his thoughts about his time on the space station.

The science panel will include Mark Kelly, a retired astronaut who is Scott Kelly's identical twin brother, as well as International Space Station Program chief scientist Julie Robinson and Human Research program associate manager for international science John Charles. The panel will break down the mission's research, including the Twins Study completed with Mark Kelly's help, and will chart the next research steps.

Twitter users can ask questions during both briefings using the hashtag #askNASA, and NASA scientists and doctors will also answer questions about the one-year mission's science starting at 11 a.m. EST (1600 GMT) Friday morning on Reddit. In addition, Kelly will participate in "Facebook Live with Scott Kelly" at 1:30 p.m. EST (1830 GMT) on the space station's Facebook page.