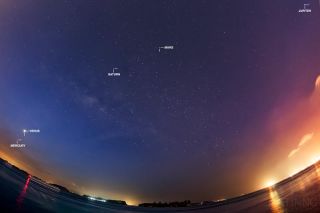 This image of a planetary alignment and the Milky Way was taken by Justin Ng on Feb. 18, 2016 from Singapore.
(Image: © Justin Ng/ www.justinngphoto.com )

The image was taken by Justin Ng on Feb. 18, 2016 from Singapore. Ng said he had about 20 days from the start of February to capture this shot, in order to get both the Milky Way and get the planetary alignment into a single image.

"My ideal location should be one that’s unobstructed from East to West so I can capture all the 5 planets including Mercury, which will be located low on the horizon minutes before sunrise. The sky has to be relatively darker as well because I will be making my first attempt to shoot the Milky Way in a light-polluted city just before sunrise, a feat that I once thought it’s impossible to achieve here," he wrote in an email to Space.com.

The planets travel along a path in Earth's sky called the ecliptic, which mirrors the plane of the solar system. A couple of times a decade, the planets all appear in Earth's sky at the same time. [Skywatching 2016: The Year's Must-See Events (Infographic)]

The last time five planets appeared in this fashion was January 2005. They are expected to return for a brief period in August 2016, although horizon-hugging Mercury and Venus will be more difficult to spot in the Northern Hemisphere.