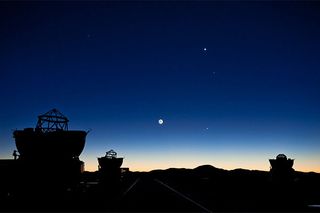 On May 1, 2011, the moon, Mars, Jupiter, Mercury and Venus formed a stunning conjunction (seen here over the ESO's Very Large Telescope in Chile). This week Saturn will also join the fun.
(Image: © ESO)

For the first time in over a decade, five planets will take center stage in the morning sky this week.

Mercury, Venus, Mars, Jupiter and Saturn will be visible in the pre-dawn hours starting on January 20th and lasting through late February, Museum Victoria astronomer Tanya Hill writes on The Conversation.

The five classical planets will align along an arc beginning with Jupiter high in the sky, followed by Mars, Saturn, Venus and Mercury poking out just above the horizon.

For those without a telescope, the dazzling celestial spectacle will be visible to the naked eye — although a pair of binoculars may prove helpful.

Earthlings were last treated to the planetary roll call in January 2005, according to EarthSky.org. It is expected to return for a brief period in August 2016, although horizon-hugging Mercury and Venus will be more difficult to spot in the Northern Hemisphere.

Beyond the five planets making an unusual group appearance, stargazers will also have an excellent opportunity to catch of a glimpse of the constellation Orion, which is most visible between January and March every year.

“Even from the city, you’ll see that its stars have different colors. No telescope needed,” NASA’s Jane Houston Jones writes. “Just look up a few hours after sunset.”