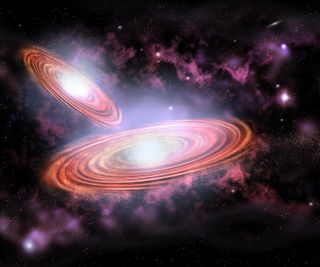 An artist's conception of two black holes merging, much like the one that produced the first detected gravitational waves.
(Image: © P. Marenfeld/NOAO/AURA/NSF))

Before confirmation of the first direct observation of gravitational waves rippled through the world, the search had already begun for visible signs of the event that generated the powerful waves in space.

Two separate groups scanned the sky in the region where the historic discovery originated, in hopes of spotting light generated by the event.

"This first attempt to detect visible light associated with gravitational waves was very challenging, but it paves the way to a whole new field of astrophysics," Edo Berger of the Harvard-Smithsonian Center for Astrophysics said in a statement. [Stirred, Not Shaken - How Colliding Black Holes Make Waves]

Berger was the principal investigator of a team that used the 4-meter Blanco telescope at the Cerro Tololo Inter-American Observatory in Chile to make a detailed search for the origination of the gravitational waves identified by the Laser Interferometer Gravitational-Wave Observatory (LIGO).

Einstein's general theory of relativity predicts that the movement of massive bodies distorts the space-time through which they travel. Last week, scientists announced the first confirmed detection of such waves, produced by colliding black holes. The detection was kept under wraps until the results were verified and published in a scientific journal. But before announcing the news to the world, the scientists contacted two other teams already in place to follow up on any potential gravitational wave observations.

Berger's team made a detailed search of the region of sky where the preliminary signal was detected. The size of the area was daunting — 700 square degrees of sky, or about 2,800 times as large as the full moon — but astronomers combed the area thoroughly over a period of three weeks hoping to find a visible signal that corresponded to the crashing black holes. Although they did not detect any unusual bursts of visible light, their observations were used to place constraints on the brightness for future attempts.

At the same time, a second team used the Panoramic Survey Telescope and Rapid Response System (Pan-STARRS) in Hawaii to search for changes in the night sky. The instrument rapidly mapped the part of the sky where the signal originated. Computers then compared the new map to one made previously and identified any changed objects.

"We didn't find anything in our data that was likely related to the gravitational wave source," Stephen Smartt, director of the Astrophysics Research Centre at Queen's University Belfast and leader of the Pan-STARRS follow-up team, said in a separate statement. "We discovered over 50 new sources that are normal supernovae — exploding stars that we find all the time. We didn't see any hint of unusual behavior."

Back in September, researchers didn't yet know that the gravitational waves detected by LIGO were from two merging black holes, Berger told Space.com in an email. Black holes don't radiate light directly, and LIGO scientist Vicky Kalogera told Space.com that it seems unlikely there would be any matter near a black hole binary that would give off secondary light. But that doesn't mean people aren't looking.

There are "several new papers that come up with exotic scenarios" that could produce light from a double black hole merger, Berger said in an email.

"These papers are mainly driven by the LIGO discovery and I expect that more will show up in the coming days and weeks," he said. "Whether any of these theoretical ideas turn out to be correct is unclear at the present.  We will continue to observe future [binary black hole] mergers from LIGO to find out."

Like the observations made at Cerro Tololo, the Pan-STARR search will give scientists a little more information about what happened when the pair of black holes collided. Both teams stand ready to search again when LIGO makes its next detection. Gravitational waves can come from other sources besides a double black hole mergers, like exploding stars or the collision of two neutron stars (the dense, left-over cores of dead stars). Scientists know that most of those scenarios will generate light that telescopes could potentially detect.

"LIGO has opened a brand-new field of astronomy, and confirmation from facilities like Pan-STARRS will be very important to understanding them," Pan-STARRS Director Ken Chambers, an astronomer at the University of Hawaii, said.