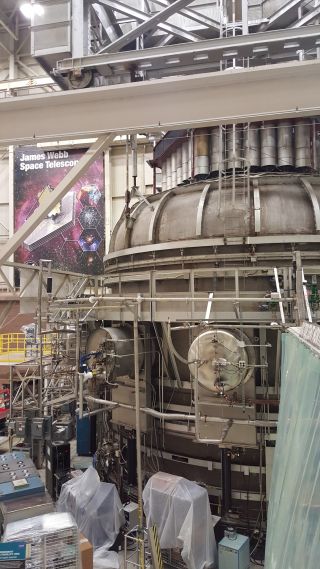 A view of the cryogenic chamber at NASA's Goddard Space Flight Center in Greenbelt, Maryland, with the instruments for the James Webb Space Telescope inside.
(Image: © Amy Thompson/Space.com)

GREENBELT, Md. — NASA continues to prep its next great space telescope for a planned 2018 launch, despite some roadblocks thrown up by Mother Nature.

Last month, "Snowzilla" pummeled the U.S. East Coast with the biggest blizzard in years. From Jan. 22 through Jan. 24, Washington, D.C., and surrounding areas were blanketed in more than 2 feet of snow. The blizzard may have stopped traffic and closed schools, but it could not stop scientists from working on the James Webb Space Telescope (JWST), the $8.8 billion successor to NASA's famed Hubble Space Telescope.

About a week after the storm, I left Florida's not-so-frigid Space Coast to journey up here to NASA's Goddard Space Flight Center, where JWST is being put together. Despite the grueling hours, JWST scientists were extremely excited to share their work and the mission’s progress. [Photos: Hubble's Successor, the James Webb Space Telescope]

"We have a dedicated group of individuals working on this project," Bill Ochs, JWST project manager, said during a media event here on Jan. 29. "Over 60 people were here working through the blizzard, many sleeping on mattresses in their office."

The telescope is scheduled to launch in October 2018, a deadline that Ochs says has held for more than four years now. To make the most of the time remaining, teams have been simultaneously building JWST's 21.4-foot-wide (6.5 meters) primary mirror (which is composed of 18 hexagonal individual segments) and testing the observatory's instruments.

JWST is outfitted with a suite of four instruments: NIRSpec (Near Infrared Spectrograph), MIRI (Mid-Infrared Instrument), NIRCam (Near-Infrared Camera) and FGS/NIRISS (Fine Guidance Sensor/Near InfraRed Imager and Slitless Spectrograph). All of them are housed in the observatory's Integrated Science Instrument Module (ISIM).

These instruments must undergo meticulous testing to ensure they can withstand the rigors of launch, as well as the harsh conditions of space.

"When you test, you have to simulate everything your instruments will see before you get to space," Goddard engineer Begoña Vila explained. "This includes vibration testing [and] acoustic and electromagnetic interference." [Superhuman Sight: JWST Will See Invisible Phenomena (Video)]

The JWST team began testing the instruments in spacelike conditions on Oct. 27, 2015, and this process continues 24 hours a day, seven days a week, with constant monitoring.

Part of this work involves lowering ISIM into Goddard’s special 40-foot-tall (13 m) cryogenic chamber, dubbed the Space Environment Simulator (SES), by a massive crane. Inside the metallic chamber, the instruments are subjected to the frigid temperatures and vacuum of outer space.

Built in the 1960s, the SES achieves the cryogenic conditions necessary for JWST with the help of nitrogen and a special helium shroud installed specifically for this mission. The interior of the SES might be the coldest place on Earth; the helium allows temperatures within the chamber to plunge to as low as minus 387 degrees Fahrenheit (minus 233 degrees Celsius).

However, even that isn't cold enough to properly test all of JWST’s instruments. MIRI, Webb’s most powerful tool, is designed to see far-infrared wavelengths of light up to 28 microns long. Only in deep chill will MIRI be able to catch a glimpse of the faintest galaxies in the universe. As such, the instrument is outfitted with its own cooler that will chill MIRI down to minus 448 degrees F (minus 267 degrees C) — just 6 degrees C above absolute zero.

JWST will leave Goddard in the November time frame and travel to NASA's Johnson Space Center (JSC) in Houston, where it will undergo final cryogenic testing. Johnson is home to the world’s largest SES, a chamber that once tested components used for the Apollo moon missions.

From JSC, the observatory will travel to aerospace company Northrop Grumman’s facility in California, where the mirror and instruments will be integrated into the spacecraft bus and its sun shield, which, when unfurled, is the size of a tennis court. (Northrop Grumman is NASA's prime contractor for JWST.) According to Vila, there is no cryochamber large enough to house the sun shield, so all testing on it will be done at ambient temperatures.

Once completed, JWST will be ready for shipment to its launch site — the European Space Agency's Kourou facility in French Guiana, in northern South America. JWST is so massive — about 14,300 lbs. (6,500 kilograms) — that the seven bridges between the airfield and the launch site cannot support its weight, Ochs explained. So the spacecraft will travel by barge through the Panama Canal to the launch site in Kourou.

Ochs said that, after launch aboard a European Ariane 5 rocket, it will take six months before JWST is fully operational. More than 180 different deployments will occur in the first few weeks after liftoff, he added.

"I envy the Curiosity [Mars rover] team," Ochs joked. "They had only seven minutes of terror; we have three weeks of high anxiety."

Once it fully deploys, JWST will measure three stories tall and be as wide as a tennis court. Scientists and engineers want to ensure that the $8.8 billion observatory unfolds as expected, and all the instruments work properly.

JWST will travel out into space three times farther than the distance from the Earth to the moon, orbiting at a point known as L2that's about 1 million miles (1.6 million kilometers) from Earth. That's far beyond the reach of any servicing mission, which is why prelaunch testing is so important.

If all goes according to plan, JWST will allow researchers to hunt for signs of life in the atmospheres of alien planets, peer at some of the earliest stars and galaxies in the universe and study the formation of stars and planets, among other things.