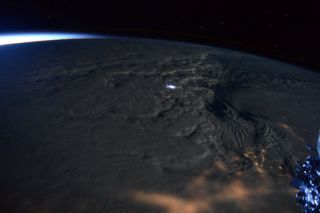 NASA astronaut Scott Kelly captured this rare view of "thundersnow" in a blizzard battering the U.S. East Coast on Saturday (Jan. 23) from a window on the International Space Station.
(Image: © NASA/Scott Kelly via Twitter (@StationCDRKelly))

As the epic winter storm Jonas bore down on the U.S. East Coast this morning (Jan. 23), astronaut Scott Kelly snapped a series of photos of the storm's evolution from orbit, including one that catches a rare view of "thundersnow."

Yesterday, NASA and the National Oceanic and Atmospheric Administration (NOAA) tracked the storm by satellite as it developed, and now NASA's furthest human outpost — the International Space Station — has reported back, too, via Twitter. [See more photos of the winter storm]

NASA astronaut Scott Kelly's first post on Twitter, in the early morning, revealed the East Coast's city lights peeking out from the veil of the snowstorm:

An hour later, he posted the blizzard passing over Chicago:

Scott Kelly is orbiting the Earth along with fellow U.S. astronaut Tim Kopra and British astronaut Tim Peake, plus cosmonauts Mikhail Kornienko, Sergey Volkov and Yuri Malenchenko, where they can watch the storm develop from afar.

Kelly's hometown — also the hometown of his twin brother Mark Kelly, a veteran astronaut — has a much closer view: West Orange, New Jersey is one of many towns seeing massive snowfall from the storm.