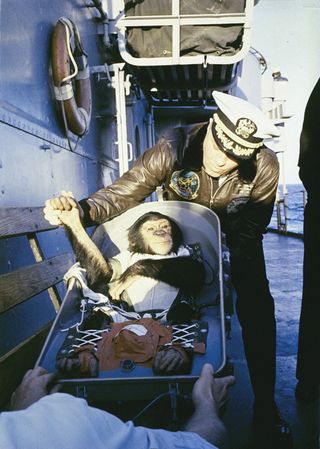 Ham, the first chimpanzee in space, after flight.
(Image: © NASA)

In the five-plus decades that humans have managed to escape from Earth's gravity well, Jan. 31 has been a busier day than usual.

These anniversaries mark significant milestones in humanity's journey toward the stars. One was a precursor to NASA's first human spaceflight, one was a critical step in getting human technology all the way to the moon and one was the first lunar mission following a nearly disastrous attempt to put humans on the moon.  [Giant Leaps: Biggest Milestones of Human Spaceflight]

The Mercury Redstone-2 (MR-2) mission, which launched on Jan. 31, 1961, was one of a series of flights that laid the groundwork for eventually putting humans into space. Among the animals that NASA sent to space as part of that preparation was Ham the chimpanzee, the first chimp in space. Ham returned safely to Earth, but other primates perished during American test flights in the 1940s and 1950s.

Only a few months later, on April 12, 1961, Yuri Gagarin became the first person ever to fly in space. On May 5, 1961, Alan Shepard took off aboard another Mercury Redstone rocket, becoming the first American in space.

The Luna 9 probe was the first spacecraft to make a soft landing on an extraterrestrial body. It took off on Jan. 31, 1966, and made it to the moon on Feb. 3 of that year. It sent back close-range images of the surface of the moon, and represented an incredible feat of spaceflight engineering.

But to this day, no one knows exactly where Luna 9 came to rest. There was no way to precisely track its location. As recently as last November, researchers announced they'd be searching for Luna 9 using NASA's Lunar Reconnaissance Orbiter.

First golfer on the moon

The three crewmembers of Apollo 14 left Earth on Jan. 31, 1971. It would become the third crewed mission to successfully reach the surface of the moon. (The nearly disastrous Apollo 13 mission was the third attempt at a crewed moon landing.)

The crew consisted of Alan Shepard, Edgar Mitchell and Stuart Roosa. Shepard surprised the world when, just before the crew returned home, he pulled out a six iron and teed off on the lunar surface. The crew returned to Earth on Feb. 9.