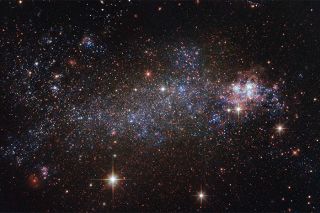 Galaxies come in all shapes and sizes, but can generally be grouped into easily identifiable regular shapes, such as the elegant spirals or run-of-the-mill ellipticals. And then there are the irregular galaxies, which account for roughly a quarter of known galaxies, that are just kinda messy.

In this recent Hubble Space Telescope observation, one such irregular galaxy, located around 16 million light-years from Earth, has been observed. It looks like a loose collection of stars that have been thrown together and shuffled, like my end-of-semester university dorm room. But this galaxy, called NGC 5408, isn't just a scattering of stars, it's a whole galaxy and it's a galaxy with some interesting astronomical history.

Originally discovered by British astronomer and mathematician John Herschel in June 1834, NGC 5408 was presumed to be a planetary nebula -- a gaseous cloud of gas generated by a dying star. But as astronomical optics improved, its true nature was revealed; NGC 5408 is an entire galaxy living by its own rules, refusing to conform to a regular shape.

According to a NASA news release, NGC 5408 is notable for its ultraluminous X-ray source, known as NGC 5408 X-1. This class of object could be the signature of an intermediate-mass black hole, one of the most sought-after astrophysical objects in the cosmos.

Intermediate-mass black holes (or IMBHs) are the "middleweight" black holes that are thought to be the missing evolutionary link between puny stellar mass black holes and the gargantuan supermassive black holes. They are, however, very hard to find and astronomers are currently keeping tabs on ultraluminous X-ray sources in the hope that they may signal the presence of these mid-sized black holes.