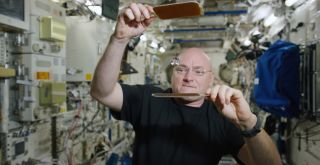 As astronaut Scott Kelly passed more than 300 consecutive days in space last week, he took a time-out from his duties to play a little ping-pong — not using a traditional ball, but a ball of water.

In microgravity, drops of water turn into floating spheres of amusement. In the cool new video, Kelly squeezed out about a 4-mL (0.14 ounces) drop of water — about 100 times the mass of a raindrop — using a drinking bag on the International Space Station. He then hit the droplet back and forth with two special paddles.

"I wanted to do a little demonstration of these paddles," said Kelly in the video, which was uploaded to NASA Johnson's YouTube channel Jan 21. [Fun in Zero-G: Weightless Photos from Earth and Space]

"They're called hydrophobic paddles, and they repel water, kind of like a raincoat," added Kelly, who is spending about a year on the station along with Russian colleague Mikhail Kornienko. (Most International Space Station visits are five to six months long.) "But up here on the space station, they allow you to play ping-pong with a ball of water."

On camera, Kelly slowly bounced the ball back and forth using two water-repellant paddles. Before they were sent up to the station, the polycarbonate paddles were etched with a laser to create a pockmarked surface, and then spray-coated with Teflon, NASA Johnson Space Center officials said in a statement published with the video. The paddles' roughness and water-repellent properties stop water from sticking as it hits.

Liquid is a challenging thing to manage in space, as space station astronauts experienced during a spacewalk earlier this month. A small amount of water leaking into in NASA astronaut Tim Kopra's suit forced the crew to cut the spacewalk short as a precaution, although Kopra was never in any immediate danger, NASA officials said. The cause of that leak is being investigated.