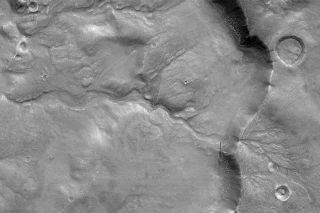 There are few more potent reminders that Mars used to be a wet world than seeing ancient, dried up river beds etched into the red planet’s surface. Although this particular example has been weathered by hundreds of thousands or even millions of years by Mars' weak winds, its beautifully preserved channel is telling us a story.

Located in Acidalia Planitia, a region dominated by a plain north of the Martian equator, this river apparently flowed from right to left, down the slope of a crater rim and into the crater itself. This image was captured by the prolific High-Resolution Imaging Science Experiment (HiRISE) camera aboard NASA’s Mars Reconnaissance Orbiter (MRO) on Sept. 25, 2015.

It is not fully understood how rivers such as these were sourced — whether by sub-surface aquifers, meltwater or even rainfall — but through studies of the long-lost rivers of Mars from orbit we can supplement studies by surface missions (such as NASA's Mars rovers Curiosity and Opportunity) to help us piece together the puzzle of Mars’ wet past.