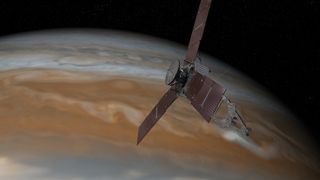 Spaceflight fans will have a lot of cosmic action to keep them happy in 2016.

While the coming year does not appear to promise anything quite as spectacular or awe-inspiring as 2015's signature moment — the July 14 flyby of Pluto by NASA's New Horizons spacecraft — there will still be a lot going on overhead.

Here's a brief rundown of the biggest spaceflight miletones to keep an eye out for in 2016, from a NASA probe's arrival at Jupiter to the highly anticipated maiden flight of SpaceX's huge new rocket. [Our Solar System: A Photo Tour of the Planets]

On Sunday (Jan. 17), the U.S. National Oceanic and Atmospheric Administration's (NOAA) Jason-3 satellite is scheduled to launch to Earth orbit atop a SpaceX Falcon 9 rocket from Vandenberg Air Force Base in California.

If all goes according to plan, the Jason-3 mission — a collaboration involving NOAA, the European climate-satellite organization EUMETSAT, the French space agency CNES and NASA — will make precise measurements of sea-level variations around the planet.

Jason-3's measurements will add to a valuable climate-change dataset that has been accruing for more than two decades, thanks to the observations of three other satellites known as TOPEX/Poseidon, Jason-1 and OSTM/Jason-2 (which launched in 1992, 2001 and 2008, respectively), NASA officials have said.

SpaceX will also try to land the Falcon 9's first stage on an uncrewed ship off the coast of California during Sunday's launch — part of the company's efforts to develop fully and rapidly reusable rockets, which advocates say could slash the cost of spaceflight dramatically.

SpaceX has already succeeded in bringing a Falcon 9 back to Earth. On Dec. 21, during a satellite launch for Orbcomm, the rocket's first stage came down for a soft landing at Florida's Cape Canaveral Air Force Station — the first time this had ever been achieved during an orbital launch.

SpaceX doesn't plan to refly the Falcon 9 booster that touched down on Dec. 21, but company founder and CEO Elon Musk has said he hopes to do this with another landed rocket stage in the next year — so that's another milestone to watch for in 2016. [SpaceX's Epic Falcon 9 Rocket Landing in Pictures]

SpaceX holds a $1.6 billion contract with NASA to fly at least 12 robotic resupply missions to the International Space Station (ISS) using the Falcon 9 and the company's uncrewed Dragon capsule. The first six such flights went perfectly, but the seventh ended just minutes after liftoff on June 28, 2015, when the Falcon 9 broke apart in the Florida skies.

SpaceX will fly its first ISS cargo mission since the accident — which the company attributed to a faulty steel strut in the Falcon 9's upper stage — on Feb. 7, if current schedules hold. SpaceX has improved the rocket in the interim, modifying its stage-separation system and electronics, among other features, Musk has said. (The revamped Falcon 9 has already flown successfully, during the Dec. 21 launch for Orbcomm.)

The European Space Agency (ESA) is scheduled to launch the first part of its ExoMars mission on March 14, blasting the Trace Gas Orbiter (TGO) on a seventh-month journey toward the Red Planet along with a technology-demonstrating lander.

The TGO will circle Mars and hunt for sources of methane, which here on Earth is primarily produced by living organisms (though the gas also can be generated by abiotic processes). The lander will take a variety of data during its descent through the Martian atmosphere and on the surface, but the main goal of the touchdown probe is to help pave the way for the life-hunting ExoMars rover, which will launch in 2018.

ESA is collaborating with the Russian Federal Space Agency, which is known as Roscosmos, on the ExoMars mission.

NASA astronaut Jeffrey Williams and cosmonauts Aleksey Ovchinin and Oleg Skripochka are slated to launch toward the ISS on March 18. The trio will blast off in a Russian Soyuz spacecraft from Baikonur Cosmodrome in Kazakhstan.

Other ISS crew launches are scheduled to blast off from Baikonur on June 21, Sept. 23 and Nov. 16.

At some point in April, SpaceX plans to launch its huge Falcon Heavy rocket for the first time, with the liftoff taking place from Florida's Cape Canaveral Air Force Station. The 224-foot-tall (68 meters) Falcon Heavy will be the most powerful booster in the world when it's operational, capable of lofting 53 metric tons to low Earth orbit, SpaceX representatives say.

Elon Musk founded SpaceX in 2002 primarily to help humanity colonize Mars. The Falcon Heavy is a big part of those plans.

The $466 million mission is scheduled to end in June, when Dawn runs out of hydrazine fuel for its attitude-control thrusters. But mission team members have said they might be able to squeeze some more life out of Dawn, so it's unclear exactly when operations will end.

Dawn also orbited the protoplanet Vesta from July 2011 through September 2012; it's the first probe ever to circle two different bodies beyond the Earth-moon system. (Ceres and Vesta are the two biggest objects in the main asteroid belt between Mars and Jupiter.)

NASA's Juno spacecraft is scheduled to enter orbit around Jupiter on July 4, nearly five years after the probe blasted off.

The solar-powered Juno will map out Jupiter's magnetic and gravitational fields precisely, revealing key details about the giant planet's evolution and structure — including whether or not it has a solid core, NASA officials have said.

Another NASA spaceflight milestone comes on Sept. 3, with the scheduled launch of the agency's Origins-Spectral Interpretation-Resource Identification-Security-Regolith Explorer mission, or OSIRIS-REx for short.

The OSIRIS-REx spacecraft will head toward a 1,650-foot-wide (500 m) asteroid named Bennu, and, if everything goes according to plan, will arrive at the potentially hazardous space rock in 2018. OSIRIS-REx will snag at least 2.1 ounces (60 grams) of Bennu material and bring the sample back to Earth in 2023.

The mission should help researchers learn more about the origin and evolution of the solar system, and it should also reveal clues about how to nudge potentially dangerous asteroids away from Earth, NASA officials have said.

The first mission ever to orbit and land on a comet will wrap up on Sept. 30, when ESA's Rosetta spacecraft spirals down onto the surface of the 2.5 mile-wide (4 km) Comet 67P/Churyumov–Gerasimenko.

The Rosetta mission launched in March 2004 and arrived at Comet 67P in August 2014. The Rosetta mothership then sent a lander called Philae down onto the icy object's surface in November of that year. The Rosetta orbiter will gather a variety data during its Sept. 30 slow-motion crash landing, adding to the detailed picture of 67P that mission scientists have already pieced together.

Europe's own version of the United States' Global Positioning System (GPS) should be operational by the end of the year, ESA officials say.

Four more spacecraft for Europe's Galileo satellite-navigation network are slated to launch this year, allowing the system to start providing initial services sometime in 2016. Galileo, which is civilian-run (in contrast to the military-run GPS network) will eventually consist of 30 Earth-orbiting satellites — 24 operational spacecraft, plus six spares. Twelve Galileo satellites have been launched to date.

This year, engineers and technicians will continue to develop and test a variety of spacecraft designed to help humanity explore the final frontier.

Indeed, SpaceX and Boeing are working to get Dragon V2 (which is an advanced version of the company's robotic Dragon cargo capsule) and Starliner ready to carry NASA astronauts to and from the International Space Station beginning in 2017; Dragon V2 may make its maiden flight, an uncrewed test, before 2016 is done. (In September 2014, the space agency awarded SpaceX and Boeing $2.6 billion and $4.2 billion, respectively, to get the two capsules ready to fly.)

And NASA will continue developing its Orion crew capsule, which will help get agency astronauts to deep-space destinations such as asteroids and, eventually, Mars. (SpaceX has also said Dragon could journey to Mars, as well as a variety of other destinations throughout the solar system.)

Editor's note: This story was updated at 3:30 p.m. EST on Jan. 11 to include the Jason-3 Earth-observing mission.