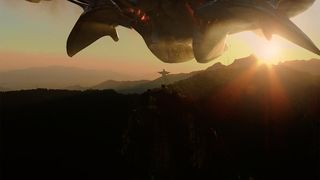 The Syfy network miniseries "Childhood's End" brings Arthur C Clarke's classic novel to the small screen. When the Overlords come to Earth, they say they want to help humans — but will there be a cost?
(Image: © Syfy)

The new cable TV miniseries "Childhood's End" is a modern take on Arthur C. Clarke's classic 1953 novel. Here's what the show's creator and some of the actors had to say about updating the story for 2015, designing the Overlord's spaceships, and whether they'd choose to live in Utopia.

Adapting a novel by one of the greatest science fiction writers of all time into a miniseries for television — 60 years after the book was published — is not a trivial feat. Syfy network's three-part miniseries "Childhood's End," which begins tonight (Dec. 14), tries to hold true to the central ideas explored in Clarke's novel, but it also works hard to make the story relevant in the 21st century.

The story begins when Earth is suddenly visited by a race of aliens who insist they have come to help humanity — they wish to stop war, cure disease and eliminate poverty. The "peaceful invasion" is upsetting to some, but eventually, as the world grows into a Utopia, people come to accept the so-called "Overlords." But the peaceful leaders still won't reveal themselves to humans, insisting that their physical form will be too upsetting. What will happen when humans finally see their alien masters in the flesh? And is there a hidden cost to building heaven on Earth. [See Photos From 'Childhood's End']

Readers, be advised: This article contains a major spoiler about the first episode of the miniseries, and discusses some of the general ideas explored in subsequent episodes. If you'd like to watch the series with fresh eyes (which we recommend you do), you may want to read this after you've seen it.

"Childhood's End" was adapted for the screen by Matthew Graham, who has written for the current incarnation of "Doctor Who," and who created the BBC One science fiction series "Life on Mars." In an interview with members of the media, Graham said he's been a fan of the book "Childhood's End" since he was a teenager. Besides the book's major plot twist — revealing what the Overlords look like — he said the book stuck with him because it didn't try to make him feel comfortable; that the emotions and ideas that Clarke presented in the book were not "spoonfed" to the readers.

Graham said he felt strongly that the story needed to be updated for the 21st century — that if the TV show was a period piece, and took place in the 1950s, it would remove the "sense of paranoia and uncertainty that pervades the book."  One of the changes that was made to the script is that the person selected to be a mediator between the Overlords and humans is a humble farmer named Ricky (played by Mike Vogel), rather than a member of United Nations, as was the case in the novel.

"I think that [change to the story] reflect[s] the age we're in now where we're a little bit less – we're more distrustful of politicians," Graham said. "So, you know, I adopted a more, kind of, Old Testament approach really, you know, it's a kind of God speaking to the farm boy […] making him a king, rather than God speaking to the king."

"I mean, in 1950 we were coming out of a very brutal war and a very expensive one. No change there," Graham said. "We were entering an age of austerity in the 1950s; no change there. We were terrified by the Cold War, […] that, potentially, is rearing up again. And substitute any fear that they had in 1952 to the fears that we have now coming out of the Middle East."

Vogel, speaking with media along with Graham, agreed that the world of 1953 looks strikingly similar to today.

"The scary thing is that, fast forward 60 years and we're kind of still in the same place, which I think is all the more reason why the story needs to be told," Vogel said. "The whole reason that these aliens come down to Earth [is] to say, 'You guys have had your shot, you screwed it up, that's enough of that right there. It's time to fix some things.' […] For all the advancements that we [have had] in technology and medicine and everything else, [when] it comes to people, [when] it comes to us dealing with each other, sadly, not much has changed."

The spaceships in "Childhood's End" are visually impressive, and they also serve as a metaphor for the role that the creatures aboard them will play.

"Very early on in the process, we would sit and talk about the ships and what they would look like. And we kind of hit up on this idea that if we followed the biblical theme, and if we followed the idea that [the Overlords] are angels, effectively — for all intents and purposes, even though they look like devils, they come as angels — and we wanted ships that reflected that. We wanted something with a silvery feel and we wanted something with the feeling of large wings. And that was how we started."

But the angelic look of the ships was transformed after the visual effects supervisor suggested that the Overlords, because they came from a fiery world, might also have fire incorporated into their ship.

"He had this idea for a kind of molten lava effect running underneath the carapace of the ship on each side. Which I'd never seen before — that there could be some kind of stone and lava effect on a spaceship seemed very cool and unusual and original concept," Graham said. "And it also means that when they come out of clouds at the beginning of Episode 1, you see that burning through the clouds. So there's a bit of both going on there, angelic silvery wonder and bit of something more ominous in the ship as well."

If aliens came to Earth…

Both the novel and the film adaptation of "Childhood's End" present their audiences with a tough decision to ponder: If aliens could provide an end to war, poverty and illness, would you accept the offer, knowing that it would also mean the end of science and culture?

Graham said this was a discussion that the cast and crew would discuss after work while shooting — it made for good bar conversation. He said he sympathizes with one of the show's characters, Hugo Wainwright Jr., played by Colm Meaney (a "Star Trek: Deep Space Nine" alum), who rebels against the Overlords and the gifts they bring.

But, he said, with the problems facing the world today — things like terrorist organizations and diseases evolving immunities to antibiotics — "I think I would take the gamble. I think I'll have the Overlords."

Vogel took the alternative view. He said his co-star, Daisy Betts (who plays Ellie) had quoted a saying: "We should strive for Utopia, but never achieve it."

"Maybe it's that sick, sadistic side of me, but I just think that – I mean, if we look at the story, yes, the aliens come down and solve the problems but it comes at a price, doesn't it?" Vogel said. "It's not for free, there's a time where everything works out, but there's still a price tag attached to it, and a pretty hefty one."

But Vogel said that even though humans have "screwed up a lot of things […] I still have a strong belief in the ability and the decency of humanity, as ugly as we can get — and we can get pretty sick and ugly — that in the end, decent people, people of courage, will rise up and will stand for what's right."

The third and final episode of "Childhood's End" airs tonight at 8 p.m. EST/PST.