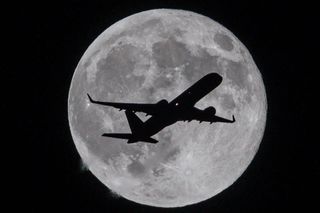 Roa takes photos of the moon as airplanes cross its face from his home in Whittier, California.  And, he often has a group of friends with him who call themselves the "lunartics."

Roa took his first such image one night, when on his way home, he watched a plane cross the full moon. Pulling over to stop, he was able to capture another plane shortly after in the same area.  [Moon Photography Tips: A Photo Guide]

"There and then I decided to make it my goal to deliberately capture planes crossing the moon. I began to look for the moon as it rose and began to follow its pattern and airplanes patterns as they passed over my home. It was hit and miss the first couple of months but I still managed to capture exciting photos of planes and the moon," Roa wrote in an email to Space.com.

Many factors come into play when taking these images. The moon has to be at the right spot in the sky relative to the plane's altitude and flight path. And, a proper exposure for the moon, camera equipment and location on the ground all combine to grab the moving plane. The size of the plane and where the moon hands in the sky also makes or breaks the shot.

Roa enjoys these photos so much, he's begun taking images of planes crossing the moon in daylight too.  But, his night photography provides lasting excitement.

Editor's note: If you have an amazing night sky photo you'd like to share with Space.com and our news partners for a potential story or gallery, send images and comments in to Managing Editor Tariq Malik at spacephotos@space.com.